Dang, up jumped an altogether conspicuous term included as a part of every building, and I totally neglected – roof slope.

Growing up in low-middle income level suburbia, I had never given much thought to slope of roofs. This oversight existed even though my father and his five brothers (as well as their Dad – my grandpa Pete) were building contractors. There wasn’t a huge variety to pitch of roofs where we lived, no architecturally designed steep slope roofs.

Once I entered the prefabricated wood truss industry, my perspectives had to change and change fast. Building designers and architects were starting to embrace possibilities afforded to their designs by trusses.

Roof pitch or slope is angle of roof surface above a “flat” or horizontal plane. 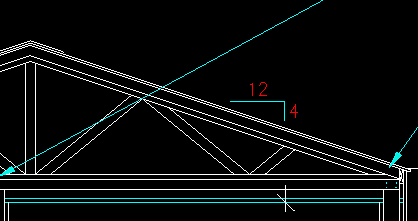 Most often roof slope expressions are as “rise” or “pitch”, measured in inches of vertical rise per foot of horizontal distance or “run”. So a four-inch rise roof, also described as a 4 in 12 roof, means for every 12 inches (or foot) of horizontal distance, height of roof increases by four inches.

Definition of Rise: vertical change in height per unit of horizontal movement or run.

Definition of Slope: angle of change in elevation, expressed in one of several forms

Our AutoCAD drafters happen to prefer pitches given as an angle, rather than slope. It speeds up their ability to create, by not having to calculate angles.