The Day a Bollard Saved my Family’s Lives

According to the sum of all knowledge (Wikipedia): A bollard is a sturdy, short, vertical post. Although it originally described a post on a ship or quay used principally for mooring boats, the word is now used to describe posts installed to control road traffic and posts designed to prevent ram raiding and car ramming attacks.  You may have noticed them in front of large buildings, such as Walmart.

From the 17th and 18th centuries, old cannons were often used as bollards on quaysides to help moor ships alongside. The cannon would be buried in the ground muzzle-first to approximately half or two-thirds of their length, leaving the breech (rear end) projecting above ground for attaching ropes. Such cannons can still occasionally be found. Bollards from the 19th century were purpose-made, but often inherited a very similar “cannon” shape.

When I built my last wood roof truss manufacturing building, I planned it with six foot cantilevered overhangs along each of the 150 foot long sides. This was so units of lumber could be stacked on each side and be out of the weather. In order to keep forklifts from shoving the units into the steel siding of the post frame building, we placed four inch diameter galvanized steel pipes filled with concrete into the ground along both sides. They worked spectacularly. 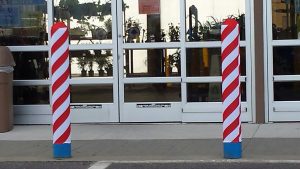 One thing I did not count upon (and therefore failed to place bollards next to) was someone backing their pickup into the steel next to the entry door at the front of the building! Poor planning upon my part.

So, how did a bollard save my family?

Long time readers may recall our family home outside of Spokane, Washington happens to be on a hillside. When I had the parking lot and road in paved in 1991, I had bollards placed along the edges to prevent people from driving their cars over a 20 foot high precipice and down the hill into the neighboring homes.

Fast forward several years – I am driving our Chevrolet Tahoe down the steep driveway leading to the parking area. Even with four wheel drive and studded snow tires, we start slowly sliding down the hill and across the parking lot.

Just as the right front tire goes over the edge of the lot, a bollard reaches out and grabs the side of the Tahoe – as I am seeing my children’s lives flash before my eyes!

The damage to the Tahoe and the Bollard, minimal, my children’s lives – priceless.

When planning your new post frame building, consider where it is vehicles might run into it (usually next to large doors) and protect them with bollards. They are considerably less expensive than having to do repairs on your beautiful new building!