Sometimes There Are Just Not Words: Hansen Building Disaster

Sometimes There Are Just Not Words to Express…  Building Disaster

How horrifically a build can be botched. 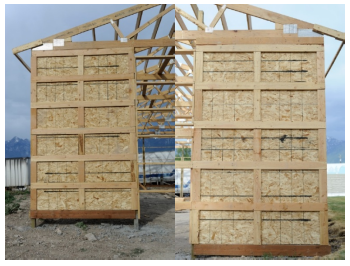 In a scene from 2013’s box office flop The Lone Ranger – Tonto (played by Johnny Depp) and the Lone Ranger (played by Armie Hammer) the heroes get themselves buried in the sand up to their necks. After looking at the photos provided by our client of what a “professional” builder did in framing his building, I am thinking tossing a coin to decide the builder’s fate might be appropriate. Heads – buried in the desert to the neck, or tails – boiled in scalding safflower oil (as we would not want the builder to meet his demise due to saturated fats).

These photos are of the front endwall of a Hansen building. The areas where the OSB (Oriented Strand Board) are visible are shearwalls. These are needed in order to carry the horizontal loads imposed on the building due to wind from the roof to the ground. In most cases, the steel siding is adequate to carry these loads. In this particular case, a large endwall door opening precludes this as a design solution.

In order to function as a shearwall the OSB has to be nailed on all edges, hence the 2×6 which is visible on the face of the columns. The engineered plans for this building happen to show the verticals as being 2×4, however this did not stop the builder from hacking up 2×6 which was ordained for somewhere else on the building. The trick to attaching the OSB at the edges (next to the columns) is to mount the provided 2×4 half onto the column, the other half projecting past the column so the OSB can nail to it.

Oops – ignored this part of the plan (and obviously never opened the Hansen Pole Buildings’ Construction Manual where this assembly is shown in step-by-step fashion).

But wait, it gets even better (or worse for the poor building owner)! Stay tuned tomorrow for the next installment .
END_OF_DOCUMENT_TOKEN_TO_BE_REPLACED