Over the past several years we have seen more and more pole (post frame) buildings with exterior decks attached. Most of these instances are in conjunction with residential and man cave uses.

This past winter has seen a lot of snow fall in some parts of the country, especially the North East. At some point in time, all of this snow piling up could pose a challenge not only for roofs, but also for decks.

In the 2012 IBC (International Building Code), Table 1607.1, the minimum uniformly distributed live loading for decks is specified to be the same as the occupancy served. For residential use, this would be 30 psf (pounds per square foot) for habitable attics and sleeping areas and 40 psf for all other areas. In Table R301.5 of the IRC (International Residential Code) the load for exterior balconies and decks is given as 40 psf. 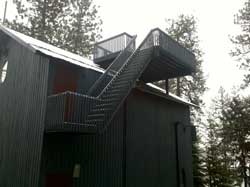 These loads are “live” loads – to account for the weights of things like furniture and your friends. It also must support snow piled up on your deck. In parts of the country with high snow loads, in my humble opinion, when the ground snow is greater than the Code requirements for decks, then the higher ground snow load should be used instead.

I discussed the weight of snow in a recent article about removing snow from roofs: https://www.hansenpolebuildings.com/blog/2015/02/roof-snow/

Most deck railings are about three feet in height. At 20 pounds per cubic foot of fairly heavy snow, if the snow piling up on the deck is getting anywhere close to railing height – it is time to get it off.

Some Dos and Don’ts for Pole Building Decks

Don’t shovel with the idea of protecting the decking. The decking (whether wood or plastic) is design to withstand the forces of nature.

If you BBQ in winter (like we do) keep a cleared path to the grill. Falling down due to a patch of ice with a plate of perfectly grilled anything takes the fun out of it. In the fall – make sure no nails or screws protrude from the deck.

The best way to clear a little (usually four inches or less) snow is with a broom. Brooms will not scrape, scratch or gouge the decking. If the snow is really light (like perfect powder), a leaf blower works wonders.

When snow gets deep, use a plastic shovel as they are less likely to damage the decking. Shovel parallel to the deck boards and never chop at any ice buildups, use an ice and snow melt product.