What I get to do every day is nothing short of fun. My life is full of interesting questions from many different angles. Today’s opportunity is compliments of Hansen Pole Buildings Designer Rachel who writes, “Guy called asking on the vapor barrier.  I know we have discussed this before but I want to make sure to tell him correctly.

He has a barn with box beams,  basically 2×12 box beams with 2×6 purlins running in between.  There is no vapor barrier under the steel and he would like to insulate with fiberglass insulation.  So would you recommend cutting and putting a vapor barrier up against the steel and then insulation or what is the RIGHT way to do this.  He has conflicted answers from people he has asked.

FYI…he can’t put in a flat ceiling.  Also he has vented soffits but no ridge vent.”

From the description it appears instead of trusses, this particular building has some combination of 2×12 built up box beams or rafters, supporting purlins on edge in between.

The building has been constructed omitting one of the most crucial elements – a thermal break between the roof framing and the roof steel. I am at a loss to come up with an answer as to why so many steel roofs do not have some method of controlling condensation.

Given what information I have, here are some solutions: 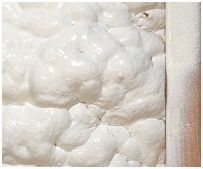 If the client wants to add some actual R value to the solution – then spray foam is going to be the way to go. Yes, it is costly, but the other alternatives are not pretty as well.

If he is looking to only control condensation – remove the roof steel, install an insulated vapor barrier as a thermal break (such as a reflective radiant barrier available at www.buyreflectiveinsulation.com) and reinstall the steel, using larger diameter and longer screws than what were originally used.

At the same time, a continuous ridge vent should be installed.

In order to use a vapor barrier and gain actual R value (such as insulating between the purlins), the Building Code requires there to be airflow above the insulation, which would entail a rework of the roof framing (besides removal and reinstallation of the roof metal). And this choice would definitely require work and expense.

Back to my first suggestion – for time and money to accomplish the goal – use spray foam insulation underneath the box beams and roof steel.