The late American radio and television writer Andy Rooney joined CBS television in 1949, however is probably best known for his end of the show segment on the CBS News program 60 Minutes, “A Few Minutes with Andy Rooney”, which appeared from 1978 to 2011.

Andy had a few words on barns, which I will take the liberty of sharing with you here:

“There’s nothing Americans of another age have built on the land that makes more difference to what our country looks like than barns. When you drive a long distance and get out of town you look out your car window and what do you see? In many parts of the Country you see barns. You see lots and lots of barns. 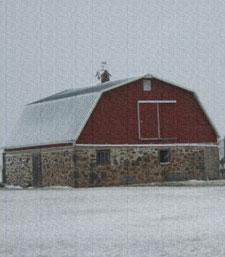 Barns look good because they’re built for what they do. Nothing fake about a barn. Skyscrapers have been tortured into shape by architects who had only some vague idea what would happen inside them. Barns, on the other hand, are purposeful. They provide a roof overhead for everything a farmer can’t take into his farmhouse. A barn covers cows in winter, horses, if a farmer has them, hay, machinery and, on a rainy day, the kids who play in it.

Barns are bigger than farmhouses and very often, better looking. A well-built barn is a thing of beauty.

The bad news is, wooden barns, like farmers, are disappearing. There were once three million farms in the United States and every farm had at least one barn. Most farms had two, some had three and a few had a whole family of barns … big barns, middle-sized barns … small barns. Barns can’t move to the city so when the farmer does, barns stay where they are and fall first into disrepair and then down.

Barns don’t give up easily but our countryside is littered with abandoned barns that are deteriorating. It’s sad to see something so noble as a barn die a slow and painful death. They deserve better than what most of them get. There is no society devoted to saving them. Their roofs no longer keep out the weather but some barns were so honestly built that they last 50 years after they’re left for dead. …

Most of the deteriorating barns are right where the farmers left them, evidence of their sad and desperate departure.”

And after being involved in over 14,000 pole buildings, many of which are barns, I’d like to add my two cents worth…

Today’s barns are most often primarily post frame (pole) buildings which, when properly engineered and constructed, will outlive the lifespan of the original owner. In the event they were originally constructed on a farm which is no longer a farm, or has changed in focus, they can most often be repurposed and their useful economic lifespan increased for generations to come.