Should a Vapor Barrier Be Installed in an Insulated Ceiling?

Should you put a vapor barrier in an insulated ceiling or not? I build in a cold climate, where many longtime builders swear that you shouldn’t put a ceiling vapor barrier in. The reasons go something like, “Because you have to let the moisture escape,” or “Because the house has to breathe out the top.” What do the experts say?

Here I will defer to Joe Lstiburek – building scientist and the founding principal of Building Science Corporation:

To heck with the experts — here’s my answer. Plastic vapor barriers should only be installed in vented attics in climates with more than 8,000 heating degree days. You can forego the plastic and use a vapor retarder (kraft-faced insulation or latex ceiling paint) in all other climates except hot-humid or hot-dry climates. In hot-humid climates, attics should not be vented and vapor retarders should not be installed on the interior of assemblies. 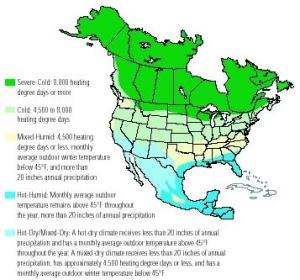