A raised heel truss is much like it sounds: the heel of a conventional metal plated roof truss, where the bottom chord intersects with (and bears on) the perimeter pole building wall columns and is fitted with a vertical member which literally raises the top chord of the truss.

Now this is nothing new. Back in 1977, one of my roof truss customers was ordering these as what was then known as an “Arkansas” truss. 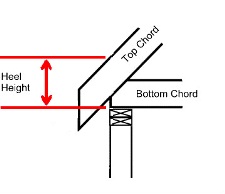 The primary advantage of raising the heel is to allow full-depth, uncompressed wall-to-wall insulation of the attic floor. Along with a properly designed attic ventilation system, a roof framed with raised heel trusses (also “high-heel” or “energy”) trusses reduces the temperature and pressure differences between the conditioned space below and the unconditioned attic area, thereby reducing thermal transfer (or heat loss) between those spaces.

This dynamic, in turn, lessens the amount of energy needed to heat or cool the conditioned space and optimizes the efficiency of the HVAC system, perhaps allowing it to be downsized in capacity—and cost.

Unlike some components within a systematic approach to improving a pole building’s energy efficiency and overall performance, raised heel trusses aren’t going to break anyone’s bank.

The value of an energy truss system is enhanced by the fact it allows builders to use fiberglass batts, the most affordable insulation option for the attic floor.

With conventional trusses, builders would have to use a spray-applied foam insulation (on the roof rafters) to achieve the same R values and meet code specifications. This is a higher-cost option for builders.

The 2009 International Residential Code, and to a greater extent its recently released 2012 version, require extensive blocking (for stick frame applications)—perhaps even a shear wall detail—between trusses with heels higher than 15-1/4 inches to guard against truss uplift and seismic forces.

With raised heel trusses, there is no excuse for a poor insulation job. With the heel height raised a foot or more, batts should not be compressed at all, thus retaining their optimum thermal resistance (or R-) value.

Consistent ventilation is a critical element of a raised-heel roof system to help regulate temperature and pressure differences between the attic and the conditioned spaces and thus achieve full energy-saving and moisture-mitigating value.

For post frame construction a continuous eave vent and a companion ridge vent running the length of the roof’s peak are usually adequate for ventilation.

A raised-heel roof truss frame can also eliminate ice dams. The design does not allow snow to freeze into ice; instead, it melts harmlessly into the pole barn’s drainage system. Also, by reducing the temperature and pressure differences between conditioned and unconditioned spaces, a builder may be able to put his central HVAC ductwork in the attic without suffering too much heat loss through those runs—even more so if the ducts are properly sealed, insulated, and designed for the shortest runs possible.

Not sure if your pole building project would benefit from raised heel trusses? Give us a call and we’ll give you the cost and benefits comparison based on the size of your building. Then you make the call.