Home >> About The Pole Barn Guru >> A Christmas Story

Thank you loyal readers for following along with my post frame building blatherings. I am in hopes my writing has been informative and occasionally entertaining. Today I will share a story about Christmas past.

I began my first business in May of 1981 and it was remarkably successful, even to me. By Fall of 1982, I had accumulated enough wealth to buy my first home (you can look it up on Zillow – 6808 Lemongrass Loop, Salem, Oregon if you are curious).

My son Andy turned five in October 1982 and he (and we) were excited for our first Christmas in our new home. Now Andy was not your average five-year-old. He and his 17 month older sister Annie shared a genetic disorder – they both had cystic fibrosis. At six-and-a-half, Annie had never had to have been hospitalized for her ailment, Andy’s life had not been nearly as easy. He had spent roughly 18 months of his young life in one hospital or another.

Before he had turned two, his pediatrician had actually told his mother and I there was nothing he could do for Andy – walked out of his hospital room and never returned!


Andy was a fairly passive infant and toddler – limited by his inability to catch his breath. At three-and-a-half he went onto full time oxygen and blossomed into a typical young boy. He spent so much time outside he had white ‘racing stripes’ on his tanned cheeks from his oxygen tubes. If it was within his 50 foot tether, he was into it.

After I opened my business Andy would come help Dad on summertime Saturdays. We’d pack a few trucks, strap an oxygen tank on my motorcycle, put on our helmets and away we went. I’d be loading lumber and Andy would be building roads in the dirt.

Come Christmas 1982, we put up and decorated a huge real tree in our new home’s vaulted ceiling front room. My Dad came down from Spokane and Andy entertained him by doing summersaults. Andy’s favorite all time gift – an E.T. bicycle.

1983 began with rain and clouds every day (it was Oregon’s Willamette Valley after all) and weather was good enough for Andy only getting to ride his new bike once – with Dad running along behind him packing an oxygen tank. Andy’s health had rapidly declined and in February his doctors gave him little time left. Our former neighbor was a Marion County Sheriff Deputy and arranged for Andy to be inducted into their force.

March 3 was Andy’s last day. Two days later he was buried with hundreds upon hundreds of police officers from all across Oregon forming his honor guard. 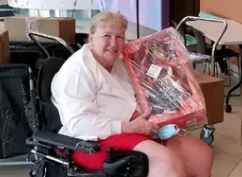 My experience with my son in long and lonely hospital stays has led me to support a charity managed by my paraplegic bride Judy (you can read about Judy’s accident here: https://www.hansenpolebuildings.com/2015/10/when-life-changes-in-the-blink-of-an-eye/).

I’m asking you, friends and dear readers, to follow more of Judy’s journey and where it has taken her at https://dolls4kids.com/.

Interesting People I've Done a Pole Building For
Building Designer Rick Carr and I were discussing ...
Insulating a Semi-Trailer Truck
Insulating a Semi Trailer The beauty of being a...
Nebraska on the Motorcycle: Classic Vehicle Storag...
Author’s Note: This is part 10 of a series of blog...