“I’m getting the question regarding rock letters from Clients and builders in central and eastern Oregon.

Have we, or do we ever send the building department a rock letter regarding buildings where optimum post hole depth is not achievable?”

When I was building, a Volkswagon sized rock was generally parked and could be found in any given project’s last hole to be dug.

With all other holes dug – moving the building to avoid a rock just never felt like a viable option. I hated digging holes to begin with as they always entail dealing with unknowns, what is lurking beneath the ground’s surface. RMS Titanic’s Captain Edward Smith must have had some of these same feelings about icebergs, you never know what is below the surface until you hit it. 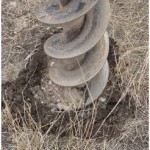 I used to take a steel stake used for anchoring concrete forms and a sledge hammer to investigate job sites prior to digging. Once building hole locations were laid out, said stake could be driven in at each hole location to determine if there were challenges ahead which could not be seen on the surface. At least by doing this stake test, we could determine with some degree of accuracy where challenges might lay, and if we thought we were going to have one, negotiate with our new building owner about shifting building location to avoid isolated rock.

My first choice for a solution would be to dig said rock out. Even if it leaves a crater numerous feet across, a sonotube can be placed at this column location, properly backfill around and column can be placed in the sonotube. This excavation is probably going to involve some heavier equipment, like a backhoe.

Behind door number two – rent a jackhammer. Unless you have hit solid granite, most rocks can be broken apart by use of a jackhammer and physical exertion to operate it.

Or a third choice (and often most practical) rent a “ram hoe” (aka concrete breaker) attachment for a skid loader or backhoe. This Hydraulic Breaker makes quick work out of a tough job. With a smart and efficient design it provides a workhorse with only two moving parts. Vibration and shock are controlled by shock absorbing polymers, minimizing machine wear and sound while improving operator comfort level. One can easily smash through concrete, even on an incline, with hardest hitting breakers in their respective impact energy classes. It has only two moving parts, one grease fitting. Also features low recoil and minimal hydraulic pressure spike, as well as unique trapezoidal shock wave for greater breaking power.

Eric’s response to Doug was, “When they can’t achieve designed depths required as shown on plans they would need an engineered fix.  No simple letter resolves the fact they could not get down to depths shown on plans. If they don’t go to use of wet set brackets a fix can be a variety of solutions depending on the rock’s size and depth. Previously our engineers have had clients who hit bedrock epoxy rebar into hole bottom bedrock to connect to concrete column encasement. Shale or other easily chipped rock doesn’t work for this solution, so it really depends on individual situations. In each case our engineer of record has to review circumstances, arrive at a design solution and client will incur costs to do so. “

This last option is not one to undertake on your own without an engineer’s involvement. You don’t want this to become a weak link resulting in failure of your beautiful brand new building.

Building Interior Height
Welcome to Ask the Pole Barn Guru - where you can ...
Acquiring a Building Permit
Unless one has grown up on a foreign planet, they ...
Typical Wall Bracing Details for Pole Barns
There are many ways to permanently brace walls of ...

One thought on “Rock Letters”