Vapor Barriers for Slabs on Grades

Our gracious thank you to Lisa Richards for this guest blog post.

Vapor Barriers for Slabs on Grade

Pouring a slab on grade is a common way to lay a sturdy floor or foundation where a basement or crawlspace is unnecessary. However, concrete slabs are vulnerable to moisture from the ground. That’s why, in most cases, a vapor barrier should be installed under the slab.

A vapor barrier is any material with a U.S. perm rating of less than 0.1 perm. Materials with higher perm numbers (more permeable) are classified as vapor retarders. Polyethylene plastic sheeting is typically used as a vapor barrier under slabs.

Do I need a vapor barrier under my slab?

Any thickness of concrete slab is permeable to moisture through vapor diffusion. Even in dry climates, water vapor will rise from the ground through the concrete, potentially causing all sorts of problems. 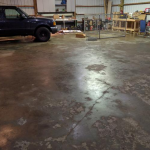 If flooring is going to be installed on the slab, failing to properly install a vapor barrier may lead to moldy carpet, de-laminated tile, or rotten wood. In areas where gases such as radon are a concern, a vapor barrier also plays a role in stopping diffusion of those gases through the slab.

For outdoor slabs, vapor barriers are generally not required. However, if a single slab will be covering both indoor and outdoor areas, do not use a partial vapor barrier. This could lead to uneven curing and severely diminish the vapor barrier’s effectiveness. Seal the whole slab.

What kind of vapor barrier should I use?

Polyethylene (poly) plastic sheeting with a thickness of 10 mil or 15 mil is the most commonly used vapor barrier under slabs. 1 mil is equal to 0.001 inch of thickness. 6 mil poly, which is 0.006 inches thick and has a rating of 0.06 perms, is also sufficient for most applications but may not be as commonly stocked as 10 mil or 15 mil.

Whatever mil thickness you choose, make sure the vapor barrier adheres to ASTM E1745 standards. These standards mean the plastic is durable and flexible enough to sit atop granular fill without tearing. Stories of poly barriers tearing during installation usually involve poly that does not meet ASTM standards.

How to Prevent Slab Curling

When poured, wet concrete contains plenty of moisture, which will evaporate during the curing process. There may be problems associated with the presence of a vapor barrier and the curing of the slab, since the moisture in the concrete can’t escape from the bottom. This can lead to “curling,” where the top of the slab will dry more quickly than the bottom, and the slab edges will rise upward relative to the center of the slab.

The best way to prevent curling is to use a concrete mix with the minimum moisture content needed to be workable. Another option is to include a blotter layer between the slab and vapor barrier. This blotter layer can be crush-run granular fill. Sometimes, sand is used, but beware that some sand could act as a water reservoir, causing more problems down the road. Check local building authorities for advice on whether to use a blotter layer. Pouring the slab directly onto the vapor barrier is a more common practice today and will likely be effective as long as the concrete is not too wet.

A vapor barrier with one improperly sealed spot will render the barrier ineffective. All seams should overlap at least 6 inches and be sealed with vapor tape. Butyl tape or a butyl-type sealant should be used to adhere the vapor barrier around any intrusions into the slab.

Other applications of vapor barriers

Vapor barriers are also commonly used in walls and ceilings, especially in cold climates, to prevent moisture from damaging building materials, and for other applications. See other ways vapor barriers can be used in your post-frame building project.

Lisa has been with Americover for the past 12 years, after coming from her position as VP of Sales for the College Loan Corporation. Her expertise and versatility in finding the right solution to meet industry needs, has inspired her customer’s confidence and is one of the many reasons she has been Americover’s top salesperson for the last five years.

One thought on “Vapor Barriers for Slabs on Grades”