Purpose of a vapor barriers

Vapor barriers are designed with one purpose: to halt the movement of water vapor and prevent it from getting into the wrong parts of your building assembly. Usually, this means protecting insulation or building materials from moisture damage.

Any material with a U.S. perm rating of less than 0.1 perm is considered a vapor barrier. Materials with higher perm numbers (more permeable) are classified as vapor retarders. Polyethylene plastic sheeting (poly) of 6 mil thickness or greater is typically used as a vapor barrier. Commonly used 6 mil poly is 0.006 inches thick and has a 0.06 perm rating.
It’s important to note the difference between vapor barriers and air barriers. Air barriers, such as Tyvek house wrap, are designed to stop the flow of air, but will allow water vapor to pass through.

Vapor barriers in walls and ceiling

If your post-frame building is insulated, installing a vapor barrier on the inside (warm side) of the insulation will protect your walls and ceiling from moisture. The greater the temperature gradient between the inside of the building envelope and the outside, the more readily the water vapor in the warm, inside air will condense onto a colder surface. For this reason, vapor barriers are most important in cold climates.

For sealing walls and ceilings, 6 mil or 10 mil reinforced poly is typically used. Depending on the building applications, fire-retardant poly may be needed.

Any holes or gaps in the barrier will allow moisture to pass through and render the barrier ineffective. Butyl tape or a butyl-type sealant should be used to affix the vapor barrier to the floor. Any penetrations, such as light outlets and ducting, must be sealed as well. Seal seams with vapor tape and allow for at least 6 inches of overlap.

Interior wall paneling is typically installed on top of the vapor barrier to protect the wall assembly. For ceiling insulation, however, an opaque white poly on the underside of the trusses can provide an attractive finish and brighten up the building interior.

For insulated buildings in the Southern U.S. or other hot-humid climates, vapor barriers are typically installed on the outside of the building envelope, under the exterior siding. Water vapor diffusion is not as big of a concern in these climates, but if the building is going to be air-conditioned, the pressure difference between the warm outside and the cool inside can be significant. 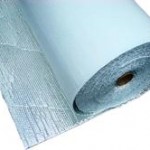 Radiant barriers are designed to reduce radiant heat gain inside a building when the sun heats up exterior walls or roofing. They are made using shiny foil and have high reflectivity. Radiant barriers installed just underneath roofing or exterior walls will make its biggest impact by reducing summer cooling loads in buildings with high sun exposure.

For slabs on grade under post-frame buildings, a vapor barrier should be placed between the concrete slab and the ground. This will prevent water vapor diffusion through the slab, which could lead to cracking, spalling, or pooling of water inside the building.

If one part of the building is going to be used as a workshop, for example, heavy-duty poly sheeting can be used to create a temporary partition to prevent dust, debris, or moisture from entering the other parts of the building.

Polyethylene vapor barriers are available at most stores that stock building materials. However, not all poly sheeting is created equal. Recycled “regrind” polyethylene could contain impurities such as dirt, debris, and moisture, and be more brittle as a result. When possible, purchase virgin polyethylene sheeting

A vapor barrier with a tear or leak will be greatly diminished in effectiveness. Americover offers durable string-reinforced vapor barriers that are made from 100% virgin polyethylene, ensuring maximum integrity and tear-resistance. 6 mil, 10 mil, 15 mil and beyond are available directly from Americover. Remember to pick up necessary sealants such as vapor tape and butyl tape.

Thank you to Tevan Ann Riedel for this guest blog post.

Tevan first founded Tri Synergy, a pioneer in sustainable solutions for the biotech market in 1989. By 1993, the company had expanded its horizons to include plastic sheeting solutions and became Americover.  Serving multiple industries worldwide from agriculture to construction, the company has experienced 20% year-over-year growth for the last 10 years alone. Today, Tevan and the team continue to innovate and develop new sheeting solutions to best leverage modern technology and meet industry demand.

Dear Pole Barn Guru: What Type of Insulation Shoul...
Hansen Buildings new feature for each Monday is “A...
The Contractor Factor! When Plans Go Awry!
The Contractor Factor I hear too many stories w...
Zero Lot Line Post Frame Construction
There are occasions where the best location to pla...