During each 3-year-cycle of the International Building Code (IBC) and International Residential Code (IRC), there exists an opportunity to propose modifications and improve the codes to recognize new and innovative construction.  During the final two weeks in April, the code proposal hearings were held in Louisville, Kentucky where several hundred proposals were discussed and considered for inclusion in the code. 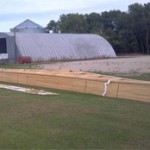 Eight proposals were identified by NFBA (National Frame Building Association) staff as having a potential impact on post-frame construction.  While the majority of these proposals were defeated, the following action should be noted:

S138-16: Submitted by the Structural Engineers Association, this proposal was approved and will require special inspection for wood trusses with a clear span of 60 feet or greater or an overall height of 60 inches or greater.  While the clear span is not a major issue, the 60 inch height may impact a number of projects creating new cost/scheduling issues.  This change is scheduled to be included in the 2018 IBC.

Having spent my entire adult life installing, designing, selling, building, delivering and purchasing wood trusses, it would seem ludicrous to require a special inspection for wood trusses with an overall height of 60 inches or greater. This would add an extra layer of inspection to nearly every building (not only post frame) project, with seemingly no apparent rationale other than the employment of a large number of people to perform these inspections (most likely the same structural engineers who made this proposal).

Trusses spanning 60 feet or more, are already required to have special inspections, under the IBC: https://www.hansenpolebuildings.com/2013/12/wide-span-trusses/.

What can you do? Contact your local Building Official today and ask them to vote to repeal this costly measure which does little or nothing to improve the safety of buildings.