Goliath, a Philistine, challenges the Israelite’s to “single combat”, a stylized way of engaging with the enemy which avoids the heavy bloodshed which comes from open battle:

Goliath expects to be met by an equal. He is a giant, at least six foot nine tall, wearing a tunic made up of hundreds of overlapping bronze scales, probably weighing more than a hundred pounds.

He has three separate weapons, each perfect for close combat. His javelin is also made of bronze, and capable of penetrating either shield or armor. He has a sword at his hip.

And his primary weapon is a type of short-range spear with a metal shaft “as thick as a weaver’s beam”.

Given his sheer size, not to mention the fate of his nation riding on his shoulders, you could say Goliath was ‘too big to fail’.

So it’s no surprise the Israelite’s don’t exactly hurry to respond to Goliath’s challenge.

Finally, David appears. But he refuses sword and armor, on the basis he’s not used to them.

Instead he reaches down and picks up five smooth stones and puts them in a shoulder bag. He then walks down into the valley to confront Goliath, carrying his shepherd’s staff.

Goliath is expecting to fight David in single combat, hand to hand.

But David has no interest in honoring the rituals of single combat. He strides off to Goliath intending to fight as light infantry instead. Then he reaches into his shepherd’s bag for a stone.

A skilled slinger in the ancient world was as deadly as an expert sniper.

Medieval paintings show slingers bringing down birds in mid-flight. Irish slingers were said to be able to hit a coin from as far away as they could see it.

The Romans even invented a special set of tongs so they could extract slingshot ammo embedded in their enemies.

“Goliath had as much chance against David as any Bronze Age warrior with a sword would have had against an opponent armed with a .45 automatic pistol.”

The soldiers alongside David thought of power as physical might. But power can come in other forms: in breaking rules, or in substituting speed and surprise for strength.

Not being burdened down by heavy armor, David doesn’t walk to meet Goliath, he runs.

Gladwell also suggests Goliath, for all his size, had abnormal vulnerabilities, too.

He asks David to come to him. He is led down into the valley by an attendant. He doesn’t even see David until he’s up close to him.

Gladwell suggests Goliath might be suffering from acromegaly – a disease caused by a benign tumor in the pituitary gland.

And a common side-effect of acromegaly is poor vision.

Seen in these terms, Goliath never stood a chance. 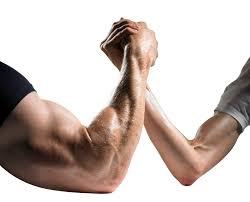 The post frame Goliath is huge – with multiple locations, hundreds or thousands of staff members on the payroll, fleets of trucks and huge expenses just to maintain their facilities and floor their inventory. When a new product or better design solution hits the marketplace, teams of employees and managers meet to chew up and spit out the idea – which may never be implemented or acted upon just due to the sheer volume of the bureaucracy.

And all of the Goliath minions – few, if any, of them truly understand post frame (pole) buildings. They have too many other products to handle – screws and nails, shovels and snow blowers, BBQ grills and Christmas decorations. In growing to become Goliath, they have lost sight of the specialty needs of the person who wants to construct their own Code conforming post frame building.

Hansen Pole Buildings is the David of today’s post frame industry. We don’t play by the “good old boys” rules of engagement. All we do is pole buildings, and because we are light and fast (think lean and mean), it allows us to change and adapt to best serve our clients and offer “The Ultimate Post Frame Building Experience™.”