Myself and my childhood cronies all grew up riding bicycles everywhere, and none of us wore cycle helmets. Also, none of us, or anyone we knew, was damaged by crashing a bike and not having worn a helmet. 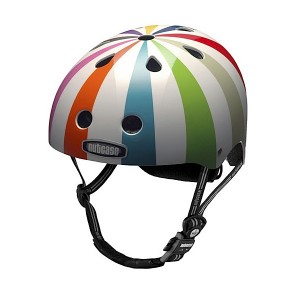 Cycle helmets are specified by their manufacturers as meeting one or  more of the international standards for this equipment. All of the standards test the helmet’s protection of only a decapitated headform,  (i.e. one with no body attached); and all tests involve only low speed impacts.   Impact speeds are less than 15 mph, and in some cases, barely 11 mph. Unlike seatbelt tests, helmet test standards do not realistically replicate serious crashes.

The highest standards are those of the nominally independent Snell Foundation, of which the B-95 standard is the most rigorous; however, the Snell standard is rarely used by manufacturers. The European standard EN 1078 is particularly weak and some other standards have declined over time. This is in part a reflection of the involvement in these standards committees of the helmet manufacturers, who want to minimize production costs in a fiercely competitive market.  Few helmets are designed to offer protection better than those specified by the standards.

There is no mandatory, third-party testing of helmets, and independent surveys have shown many of the helmets on sale do not meet the standards to which they are accredited. Very few meet the more demanding standards.

In 2001, the US Consumer Product Safety Commission reported although helmet use had risen over a decade from 18% to 50% of cyclists, head injuries had also gone up by 10%. There was no clear evidence cycle use had increased.

All buildings are hopefully designed to meet or exceed minimum climactic loads (snow, wind and seismic). People get an unrealistic idea of their new buildings being somehow invincible due to being “Code conforming” and meeting the required minimums.

The problem with just meeting the minimums, just like cycle helmets, is it creates a false sense of security. New building owners mistakenly believe their new Code conforming building is somehow now impervious to the effects of mother nature.

The minimum design loads for Risk Category II buildings (like houses) allows for an occurrence which is greater than the design loads of once in 50 years. In theory, all buildings in this category should collapse within 50 years of construction. Luckily wood frame construction has safety factors built in which, in most cases, preclude catastrophic failures.

How to do it the right way (or at least more better)?

Have your new post frame (pole) building designed for loads greater than what is required by Code. An increase in wind and/or snow load resistance of as little as 15% can double the life expectancy of a building due to climactic circumstances, generally for a minimal extra investment.

Pole Building Pool Cover
Welcome to Ask the Pole Barn Guru - where you can ...
Vertical Flush Walls
There is a builder in my neck of the woods who adv...
Glazing: Tempered Glass
I know people whose only idea of glazing comes in ...