This first appeared at www.ValleyNewsLive.com on Monday Oct. 12, 2015:

“High winds caused a building under construction to fall in Fargo Monday.

City building inspectors say they will survey the damage.

Winds have reached close to 60 mph in the Fargo-Moorhead area. The high gusts also knocked out power to some 4,000 customers in Fargo early Monday.” 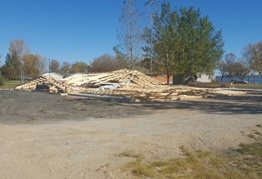 Another stick framed building under construction blew over near Browns Valley, Minnesota the same afternoon.

Let’s discuss wind forces first. Under the 2012 IBC (International Building Code) the lowest design wind speed (Vult) for this area of the country is 105 mph (miles per hour). https://publicecodes.cyberregs.com/icod/ibc/2012/icod_ibc_2012_16_sec009.htm

This equates to a pressure of 28.224 psf (pounds per square foot), which is calculated by multiplying the wind speed squared by .00256.

Partially sheathed (sided and roofed) stick frame buildings are particularly susceptible to damage by winds, as in the partially enclosed state, they often behave as a balloon, with the wind pressure increasing inside until the building literally explodes.

Back in my early prefabricated wood roof truss days, we had supplied the roof trusses for the post office in Thompson Falls, Montana. The building was fully sheathed with plywood, however a plethora of window openings were left on one side of the building.

We heard from the contractor after a fluke high wind event literally sucked the walls out from under the roof system!

An alternative construction method, post frame (also known as pole building or pole barn) construction, could potentially be a solution to such during construction issues. With continuous columns properly embedded in concrete backfill to resist wind forces of uplift or overturning, the main framework remains intact in cases such as the collapses above.