Glu-lams: Which End is UP?

Which End is Up?

Luckily, the two of us settled matters like most human males – we duked it out (at least electronically), got past it and then figuratively went and had a beer together. I’ve since had the opportunity to learn a lot from Mike Burkholder.

One thing he mentioned in an email had me chuckling:

“To try and make sure an incorrect application does NOT occur we clearly state on a column sticker placed at the top of every post the need for this material as determined by the building designer (I actually plan to include a copy of this sticker in my updated website).  The sticker shows which end is up (and yes I did have one rocket scientist many years ago think the “green end” went in the air), the correct orientation (turned strong axis perpendicular to wind loading), noting the presence of mechanical fasteners as well as need to fasten column together at the top after trimming (the one aspect of NDS 15.3.3 we don’t meet).  If you look at any nail lam column on the market today you’ll see similar column stickers…..they all originated from ours.”

I just could not fathom how anyone could look at a column (whether nail laminated like Ohio Timberland’s or glu-lams) and place the untreated end in the ground and the pressure preservative treated end (which is clearly green colored from the chemicals) up into the air.

To me the chances of this occurring were about equal to the story of Facebook about the planet Mars will make a once-in-our-lifetimes, remarkably close approach to Earth on 27 August 2015.

Well I used www.snopes.com to check out the Mars story, and it is false – which got me worried the upside down glu-lams thing could happen again….

Twice in the same week. 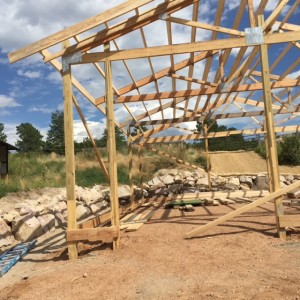 In one case, the client happened to call (slightly irate) because he had placed some of the glu-lams in the holes before he noticed there were some with the pressure treated end up! Luckily, all he had to do was pull the columns out of the holes and flip them end-for-end.

The other story…..not so happy.

In the client’s own words:

“We added extra concrete to the holes for a full 5.5 yd. pour instead of 2.5. That left only about 4 – 8” in each hole to be filled in. Now for the issue: Had a guy over 2 days ago who is a builder and friend of my daughter. He looked at the pressure treated poles and informed me that the crew had put ½ of them in upside down, that is, the poles were only ½ pressure treated to begin with and only about ½ of them were in the holes correctly. The others were put in with the unpressured treated ends in the other holes. It is a bit late now to point fingers or re-do the structure and the construction crew had no idea that only ½ of any pole had treatment and the other half did not. How bad is this and is there any mitigation you might recommend? I have decided to go ahead and pour concrete for the floor so at least the poles will be covered.”

Short of tearing the building down and replacing the columns, about all which can be done is to try to mitigate the potential problems with the glu-lams.

Most decay problems occur within the top foot of the soil, the suggestion was made to liberally coat the columns with Copper Naphthenate, from the top of the concrete encasement up. (https://www.hansenpolebuildings.com/2014/09/pressure-treated-lumber-2/)

Using glu-lam columns? Please make certain the pressure preservative treated end is placed where it belongs – in the ground!