“A nice lady from Pennsylvania called and said she was looking to get some advice.  Her husband died five months ago and she is having a pole building put up.  It sounds as though they have the poles up, skirtboard on and the concrete poured although there is a problem……she can put her entire hand under the concrete slab and she doesn’t think this is right.  She said they excavated the ground and then added fill to get it level.

So there are a couple issues she has.

Would you have any advice for her?”

Issue Numero Uno – yes, she should be worried. The “fill” (I will use the term loosely on purpose here) was probably not either the proper material, was inadequately compacted or both.

There is nothing more important to the quality of a concrete slab poured on grade than a properly prepared site. I’ve written about it extensively in the past:

When voids occur under the concrete slab, if the concrete is not strong enough to span the void, the slab will crack, break, and collapse into the void.

Problem Part Deux – I’m lucky, my bride is a girl, a nurse and knows more about building construction than most males. Chances are good the person who is doing the work is not actually an engineer. If he is not, it would behoove her to require the contractor who poured the concrete to pay for an independent registered soils engineer to inspect the work and recommend the best fix. 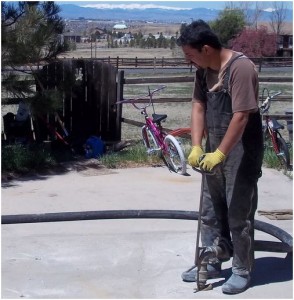 The repair is typically going to be one of two options. The first is what is known as mudjacking or slabjacking. Used for decades, this process involves pumping a flowable (high-slump) cement-based liquid under the slab. The fill material then cures to form a solid concrete subbase.

A newer process is the use of dual component polyurethane foams. Compared to concrete replacement, polyurethane foam is inexpensive and exponentially faster. Repaired areas can be utilized within minutes and the process is far cleaner than traditional mudjacking.

In the event the new building owner is unable to receive a satisfactory resolution from the contractor, her only alternatives may be to seek competent legal counsel.

2 thoughts on “Voids Under Concrete Slabs”