Somewhere between poor communications and irrationality we received this from one of our clients via email:

“You may recall we were also hoping to have the ability to hang things from the ceilings like lights and HVAC.”

“Unfortunately, after all that rigmarole we have come to the stark realization in the last few weeks that when we sheetrock and insulate the ceilings, there is no load values left to hang anything.  Not the 15 pound lights – not half-dozen 100-pound air handlers – not even the wiring in conduit for them.  Just painting the sheetrock pushes us dangerously close to the 5 lb. per sq.ft. load limit of this second design your engineers created.  Our only solution was to design an entire Uni-Strut infrastructure inside the building to hang these items, to the tune of $10-12,000 in materials alone – no labor – no engineering.  Add another $15,000 for that, plus tax for a round total of $30,000 to build a frame just to hang lights and HVAC.” 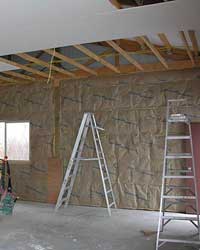 This particular pole building is a 50 foot wide clearspan and 100 feet in length. A pair of these trusses, spaced 14 feet on center weigh 701 pounds or right at 1 pound per square foot (psf), according to the manufacturer.

The truss bottom chords are designed to support a five psf dead load, which would include 5/8” gypsum wallboard (2.31 psf, or 1.8 psf for light weight panels), 2×6 ceiling joists every two feet (1.0 psf), R-38 fiberglass insulation weighs 0.63 psf. So of the available 5 psf, just under four psf has been used, leaving 2-1/2 tons of capacity to support wiring and lights.

A surprise was the air handlers, it would have been handy to have known where they would be placed prior to having the trusses designed for the ceiling load, as the 100 pound concentrated load is relatively minimal (in the global scope of life) in comparison to the 19,810 pounds a pair of trusses is designed to support.

If you are considering purchasing a pole building, or a building or any kind, please let the person designing the building know ALL of the things you plan to hang from a ceiling!