Last summer my friend Shelean and I were visiting my favorite biker watering hole Stateline Cruisers (read more about Cruisers at: https://www.hansenpolebuildings.com/blog/2013/05/pole-building-13/). I was enjoying a tall cold one, when a fellow patron of the establishment approached me and asked if I remembered him.

Turns out, I did. Back in the early 1990’s, when I was building pole buildings, I drove my restored 1950 Chevy 5-window pickup to make a sales call on Thad, who lives in the Spokane Valley. Thad and I immediately hit it off, as he also owned an old Chevy pickup and we spent far more time talking trucks than the new building for his truck.

Now Thad did end up ordering a building from us. Assigned to construct his building was one of our newer building crews (they had only done one previous building for us). Twenty years later, this particular builder has become relatively successful – at the time, not so much.

After the building was completed, Thad asked me to swing by and take a look at it, before he made the final payment. Being as we had hit it off so well, and he was nearby, I told him no problem.

From the street, the building looked great, nice trim work and straight screw lines on the walls. Thad took me inside of the building, closed the doors and had me look up. 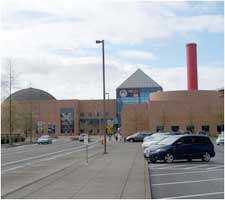 When I lived in Oregon in the 1980’s one of the sights to see in the Portland metro area was the OMSI (Oregon Museum of Science and Industry) planetarium. Then located at Washington Park, the blue and green 32-foot geodesic dome, the Planetarium seated 160 people and featured a 400 pound star projector creating almost 1000 stars using 32 giant lenses.

Let me tell you OMSI had nothing over the view of the inside of Thad’s roof. I’ve never seen so many pinholes of light – all I could think of was that someone had let loose with a buck shot blast.

There was no apology large enough for me to offer Thad – I told him his roof steel would be replaced, which it was.

Twenty years later – Thad had nothing but kind words for how his building was handled.

The moral of good construction, it isn’t how well you do it initially, it is how you solve the problems which inevitably come up.