This is a story which is heard all too frequently. And it always revolves around clients having just poured the concrete slabs in their new buildings. Even more so when the building has a low perm rated vapor retarder under the concrete.

The lower the perm rating of a vapor retarded, the better. A 1.0 perm rating will allow approximately 10 times more water vapor to pass through than a product rated 0.09, under the same conditions.

Moisture will flow from areas of high humidity or temperature to areas where these conditions are low. The force which drives the moisture through a vapor retarder is the vapor pressure differential. 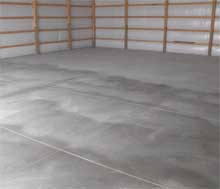 Freshly poured concrete contains a tremendous amount of moisture. In a typical two car garage (24 feet square) with a nominal four inch thick slab – the concrete contains approximately 138 gallons of water! As the concrete cures, much of this water is liberated into the air, increasing the relative humidity and vapor pressure within the building.

Ventilation is the simplest way to reduce humidity and vapor pressure and also lower the probability of condensation related problems. Failure to adequately ventilate a building during and after a concrete pour can result in condensation on the surface of the vapor retarder and potentially within any insulation. This is particularly critical in colder temperatures.

The easiest solution to “rain” after a new pour? Open up all of the doors and windows until the “rain” quits! And don’t panic – this will resolve the problem. My lovely bride came up with the idea of putting several fans on the concrete –but the concrete should NOT be forced to dry any “faster” as this lessens the overall strength of the finished concrete. You are best to retard the rate at which the concrete dries.

The whole point is – as the concrete dries, at its own natural rate, to ventilate out the moisture it releases into the air