Home >> About The Pole Barn Guru >> Japanese Framing Part I

ON SITE IN JAPAN: OBSERVATIONS OF A U.S. FRAMER

My cousin Amy was recently visiting Japan and happened to share on her Facebook page an article written by her Dad, my Uncle Neil Momb, written about his adventures in building in Japan. Although my Uncle Neil was the only one of my Father’s siblings who did not stay in the Spokane area in adulthood, the few interactions I had with him over the years proved to me what an exceptional person he was. It wasn’t until after his death in 2011 I came to find besides being a builder, he was an extraordinary photographer.

The article Amy shared, brought to mind to me the differences in perception of how post frame (pole) buildings should be constructed in America. Regionally we tend, as providers, designers, builders and Building Officials, to plant our feet firmly in the ground and believe not only is our way the best way, but the only way….to construct a building.

For your reading pleasure, here is the article from the February 1991 Journal of Light Construction written by my Uncle Neil: 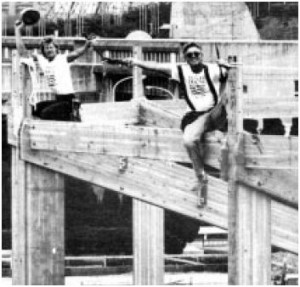 “I tried to be nonchalant, but I doubt my performance would have earned an Oscar. The voice on the other end of the phone line was telling me my framing company had been selected to go to Japan to build a “Supermarket of Homes” center using American-made glu-lam lumber and fasteners. The purpose of the trip, according to Frank Michaels, president of Michaels International, the Seattle-based export firm that sponsored our visit, was to promote American building techniques and thereby increase the demand for our products.

I had learned several months earlier that my firm was one of more than a thousand that were being considered for the job. We were finally chosen for a number of reasons. For one, my crew is experienced in post-and-beam construction, the building technique that predominates in Japan. But more importantly, I was 53 years old at the time and still active in my business. The Japanese revere age. In fact, most of the carpenters we worked with were in their mid-40s, an age when most of us in the states would be looking for ways to get out of the field and into a nice, comfortable office. My age gave me the credibility I needed to teach new construction techniques that bucked centuries of building tradition.

That first trip, in 1987, was to Osaka, a large, crowded city about 300 miles south of Tokyo. I returned to Japan two more times on a second project in Fukuoka, a smaller city on one of the tropical islands adjacent to the main island. There we framed the gourmet food center buildings for the Asian-Pacific Exposition of 1989. I plan to return this spring to begin a third project.

We were successful in our efforts to encourage Japanese builders to use more American products. Thanks in part to the work we did in that country, tariffs have been reduced, making the prices of American lumber products more competitive.

I’ve kept in close touch with most of the tradesmen I met during my trips. They tell me they are still using some of the many techniques we taught them. In turn, I tell them how my trips made me a better and more conscientious craftsman. I found a new respect for wood and the importance of patience on the job site – two things that are common in Japan and uncommon in America.

As you might expect, there are plenty of differences in the ways our two countries manage the job site. The first thing that hit me was the number of laborers it took to complete a simple job, like bolting the sill to the foundation or cutting the floor joists. I got the impression that work was being created instead of saved, something that doesn’t make sense given the nation’s shortage of qualified carpenters.

In Osaka, I watched a construction crew lay ceramic tile on the exterior of a five-story commercial building. The whole building was scaffolded with bamboo poles lashed together with rope. Workers were stationed at platforms all the way up the side of the building and were moving mortar to the top with shovels. The one at the bottom would take a shovelful of mortar and dump it into the shovel of the guy up at the next platform. The mortar worked its way up until it got to the guy at the top who had a tub to store it in. In all the time I watched, they barely spilled a drop.

I’m sure the Japanese are familiar with lifts, just as they know all about steel scaffolding. But in some cases, it seems they just like to stick with what’s traditional. The Japanese are very good at what they do, they just don’t always do it the fastest way.

Three or four levels of command are in place on the job site at all times. If there are questions or problems, the people in charge call a meeting to discuss a course of action. As one who is used to making decisions on the spot, I found this pretty frustrating. Add to the fact that I barely understood a word of Japanese and you get the picture.

It also seemed everything was planned to death. The day’s schedules were detailed to the last minute, although they were rarely followed because of all the time-outs to discuss problems. We figured that the average Japanese framing crew, after all those meetings, gets about one-third as much work completed in a day as we do.

Work starts at 8 a.m. and concludes about 6 p.m. But there’s a long lunch break when everyone scouts out a comfortable spot for a nap. With the unbearable heat (most days it was 100 degrees F. and 100% humidity), that nap is essential.

Come back tomorrow….for the rest of the story on Japanese Construction…