My Dad and Uncles were framing contractors. My male cousins and I all worked for their business (Momb Enterprises, Inc.) at one time or another, typically during school summer breaks. The first task on any new jobsite was my cousin Kim hanging up the infamous “MEI Slaves” sign.

My Uncles, especially Lyle and Gil, were framing perfectionists. For us of the younger generation, we were the strong backs – the doers and go-fers. Our job was not to question why, it was to do it quickly and accurately. 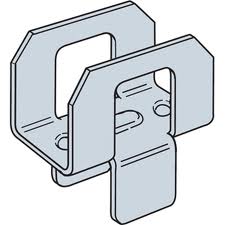 One of the things never explained as to “why” was the use of plywood H clips on the roof sheathing for some jobs, yet not on others. An H clip looks exactly like its name. Technically known as “Panel Sheathing Clips” they are used to brace unsupported sheathing edges and are usually made of 20 gauge galvanized steel.

One finds out what constitutes “with edge support” from the APA publications where the sheathing Span Table footnote reads: “Tongue-and-groove edges, panel edge clips (one midway between each support, except two equally spaced between supports 48 inches on center or greater) lumber blocking, or other.”

APA has never actually tested H-clips to see how much they improve (reduce) deflection. In testing panels are checked for deflection under a 200 pound load but then the deflection gear is removed and the panels are loaded to failure. The roof sheathing clips always pop off before the panels fail (due to the amount of deflection).

All that said, 3/8″ panels with a 24/0 Span Rating installed on supports 24″ on center is not particularly robust–especially if you’re walking on it. It is however capable of carrying the uniform loads for which it is rated 30 # Live Load, 10# Dead Load at maximum span (with the use of clips). Also, in wind tests we find fiberglass shingles tear out around the staples or nails before the staples or nails withdraw from the 3/8″ panel.

H clips DO create the expansion space required by sheathing manufacturers for their products (we used to place a nail between panels to use as a spacing gauge).

Other than some isolated Residential Building Code, roof sheathing clips are not required for structural purposes – other than to increase allowable spans between supports, in some cases.

Widow's Peak Construction in 9 Easy Steps
What distinguishing physical feature do Leonardo D...
Building Official Out on a Limb
Don’t get me wrong – in case I have not previously...
What is included in a Hansen Building Kit?
Welcome to Ask the Pole Barn Guru - where you can ...