Pole Buildings in the Nanny State

I’m looking out of the sliding glass patio door of an ocean front, fourth-floor condo in Crucita, Ecuador this morning….watching the waves rolling up the beach. Over the last week, my bride, my brother and I racked up over 1600 kilometers in a rental car – checking out the country.

As best I can tell, with very few restrictions, one can construct just about any type of building anywhere in this country. This may be one of the many reasons so many gringos are escaping the United States for Ecuador – the freedom to utilize one’s own property in the way one sees as the best fit, rather than a nanny state dictating for you what is in your best interest.

I just read an article in the Forest Lake Times (Minnesota) authored by reporter Mary Bailey, which underscores the issue of government intervention. 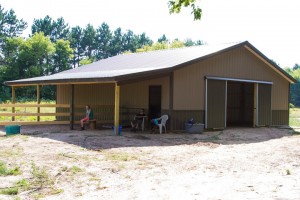 “In need of storage space for farm equipment, Thomasen planned to put up a second machine shed last winter on the 40 acres he owns on Oren Road. He farms about 350 acres and stores part of his machinery on a farm he rents.

But in Scandia, Thomasen found, on 40 acres he can’t have the size building he needs. Current ordinance limits the total square footage of accessory buildings on 40 acres to 5,500 square feet.

In May Township, Forest Lake, Hugo, Columbus and Lino Lakes, there is no limit on the size or number of agriculture buildings on lots over 20 acres. A Scandia resident must have 80 acres to have no limit on total square footage.

Rather than request a variance, Thomasen asked the city to change the ordinance.”

It turns out even their planning commission agreed the 80-acre requirement for unlimited agricultural buildings is too restrictive, but also wanted to look at the square footage and number of buildings allowed in other categories.

Instead of 80 acres, the planning commission could match neighboring cities and use 20 acres for unlimited agricultural buildings. The council had asked them to consider changing the number to 30, as one council member was not comfortable with 20.

Then the debates began:

“Most of the planning commissioners also preferred using 20 acres. “In our comprehensive plan, we said we want to be more friendly to agriculture,” Council Chair Maefsky said.

“It seems arbitrary and whimsical to use 30 without a specific reason,” added Commissioner Jan Hogle.

Only Steven Philippi questioned the wisdom of moving to 20 acres, saying a higher building density can produce conflicts with neighbors and cause more traffic. “Do more agriculture buildings make the character more rural?” he asked.

Limiting accessory structures is one way to prevent future use that is not compatible with the neighborhood. “If the property changes hands and is no longer agriculture,” City Administrator Anne Hurlburt said, “what will happen to those buildings?”

“You need 120 bales to sustain one horse over the winter,” he said.”

Farmers, like Mr. Thomasen, often own smaller tracts of land themselves – where they need buildings to store and maintain equipment, while they may own and farm numerous scattered parcels, or cash rent land from others.

For those who are not familiar, an acre of land is 43,560 square feet. A restriction of 5500 square feet of building on 40 acres, is to be allowed to cover less than 1/3 of 1% of the area with buildings! Applying the same restrictions to this article of about 700 words – would limit my writing to TWO WORDS!

IndepenDance at the Pole Barn
I ran across the title of this event on the ‘net a...
Frame Building Expo
The National Frame Building Association (NFBA) beg...
Cupola Sizes, Insulation for a Ceiling, and Struct...
This week the Pole Barn Guru tackles reader questi...