Home >> About The Pole Barn Guru >> Nebraska on the Motorcycle: Classic Vehicle Storage

Author’s Note: This is part 10 of a series of blogs written from a 6500+ motorcycle trip from WA to Ohio and back.  See Blog from Oct. 15th for the beginning…and hang on for the ride!

Day ten, I was on the last leg of my m 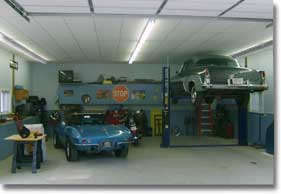 otorcycle journey back to Browns Valley. I made a pit stop for fuel in the middle of Eastern nowhere Nebraska and got to talking with the rider of a BMW motorcycle who was filling up at the same time. We were discussing where we were headed (yes, I will talk with nearly anyone) and he asked if I had heard anything about the classic car auction to be held in Pierce, NE. I told him I had not, but he was headed there to check it out.

I didn’t have a chance to catch up and check out the event until Sunday, and this is what I found on the ‘net”

PIERCE, Nebr. (Reuters) – America’s love affair with the automobile was on full display Saturday as thousands of people converged on a muddy field in rural Nebraska for the auction of one of the nation’s largest collections of vintage Chevrolets.

Antique car buyers mingled with history buffs and ordinary folks who just wanted to show their kids the cars of days gone by at the weekend sale of some 500 vehicles owned by the late Ray Lambrecht, who was the local Chevrolet dealer for 50 years.

Until his retirement in 1996, Lambrecht stored any unsold new vehicles in a shed, in outbuildings, and behind a grove of trees outside of town.

Locals knew about all the cars and pickup trucks, but people in auto circles and history buffs did not – until the family decided to put them up for auction earlier this year.

“From the road, you would have never guessed that all of this was here,” said family member Cassie Wondersee of Dwight, Kansas, as she stood in the mud with her Mastiff dog.

More than 430 “new” cars and pickup trucks were pulled out from among the trees. Another 50, in better shape, were moved out of the sheds.

Among those up for auction were a 1958 Cameo Pickup with the odometer showing it had traveled only one mile, a 1964 Chevrolet Impala with four miles, and a red 1963 Impala with 11 miles.

People peered into and poked around the engines, doors and interiors of row after row of cars and trucks. One enthusiastic bidder called it the car geek equivalent of the Woodstock rock music festival of 1969.

Food vendors pulled their trailers into the field, and portable toilets lined every exit. Soft drinks and beer were readily available.

Motel rooms were impossible to get anywhere near Pierce, with some attendees staying as far away as Omaha, 145 miles to the southeast.

In Norfolk, Nebraska, 14 miles south of Pierce, workers in fast-food restaurants and convenience stores were renting out rooms in their homes to accommodate the weekend crowd.

“Yeah, things like this don’t happen much,” said Brandon Wagner, a contractor who runs Wagner Excavating.

Wagner had a front-row seat right from the start of the auction, as he was the one who moved the vehicles out of the trees and into the muddy lot for the auction.

Breaking up the collection was tough for the family, said Wondersee, but she hoped the new owners would restore the cars and get the vintage Chevys back out on the road.

Potential buyers and car enthusiasts check out a 1978 Corvette, part of the vintage automobiles from …

“I hope people are not disappointed. They are not all perfect. Some have rust from sitting outside all these years,” she said.

Besides racking up miles on the Yamaha motorcycle, I also own a 1950 Chevy Pickup, so I can appreciate classic vehicles. What is a terrible shame (at least in my eyes) is so many of Lambrecht’s cars and trucks had spent years rusting away out in a field.

Some of these could easily have fetched six figures in value, had they been properly stored in a pole building or buildings. The difference in value for a single vehicle could easily have paid for a structure large enough to have housed them all.

Please, I am appealing, if you have a classic vehicle, don’t let this happen to you. So much automotive history has been decayed away by neglectful storage. Get yourself a new pole building – and save a piece of Americana.

And that folks, is the end of my ten day trip across the Midwest on my motorcycle…from WA through Canada catching parts of MT, ND, SD, MN, NE, OH, MI, WI, IA and IL.   By the time I got “home” to WA, I had broken my odometer cable, (it’s a little disconcerting riding at 0 mph, but thankfully my GPS also reads mph); the starter went out (an 1100 pound bike is a real treat to “jump start” down a hill), rode through fog, rain and believe it or not….slush left from snow in 40 degree weather in Rapid City, SD.  How was my trip you ask?  I had a ball – and I’d do it all over again…..next year!