Right to Work Laws seem to have certain logic behind them – worker freedom is safeguarded by not forcing workers to join a union, in order to get a job.

Currently a great deal of attention is being paid to state battles over union power, with Right to Work proposals receiving plenty of press nationally. States are turning to Right to Work legislation, to jump-start their troubled economies and safeguard worker rights.

Studies show, laws which eliminate the union grip on workers tend to have higher job growth as well as more disposable income for workers.

Let’s look at the statistics from the decade which ended in 2009.

In the 22 Right to Work states, non-governmental employment grew 3.7% and real personal income rose 28.3%. The forced union states, not so good, as the same measures feel by 2.8% and 14.7% respectively.

What does this have to do with Pole Buildings? 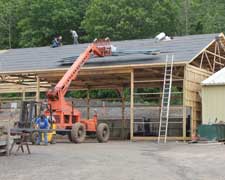 Good question. With skilled workers moving into Right to Work states, it affords those who are looking to have new pole buildings constructed, the ability to choose from higher quality contractors, and not have to deal with union mandates and forced pay scales in order to get the work done.

Of course, in non-Right to Work states, there could also be those who have held on and are looking to find work wherever they can. This could result in some bargains for those who are willing to hire contractors who are working outside of the unions.

While this is a touchy subject for many, I’ll be looking forward to hearing the feedback from readers as to their own personal experiences (on their new pole buildings) in relationship to the work rules in their own locale.