Home >> Lumber >> Pole Barn Detective: Is it a Glulam?

Pole Barn Detective: Is it a Glulam?

Is it a Glulam?

Usually the process works this way – check with the Planning Department to confirm the desired building can be constructed on the property, have pole building plans prepared by a registered design professional (RDP – engineer or architect), apply for and be granted a Building Permit, then build.

The photo of the inside of this particular building, is a case where the building owner skipped steps 1, 2 and 3 going directly to #4. The building owners problems came – when they needed to get a permit for electrical and oops!!

Just in case anyone was wondering, this is NOT a Hansen Pole Building kit package.

Anyhow – the Building Official is now questioning the posts used in this building (see photo). 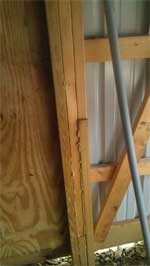 In case anyone is even wondering, the column shown is NOT a glulam. What we are looking at, is six pieces of 2×6, which have been glued together with construction adhesive. Quality control, as far as aligning the 2×6 members, was not necessarily high on the list of important things when they were assembled. The alignment issue is actually just one of aesthetics, not of functionality.

Now we are going to discuss structural functionality.

The glue can be discounted entirely, as construction adhesives are not designed for this type of structural application. What we have here is nothing more than a nail-laminated column,which does not qualify to call it a glulam.

In 1984, my academic post frame hero (Dr. Frank Woeste), was a co-author of a paper on “Nail Laminated Wall Columns from Dimensional Lumber” (see TRANSACTIONS of the ASAE Volume 27, Number 4, pp. 1127-1130, 1984). This paper reported the test results from nail-laminated columns, with internal non-reinforced butt end splices.

In their testing, the lower members were staggered two feet from each other, similar to the photo which probably used 8 and 10 foot long 2×6 on the exterior and a 6 foot in the center. Dr. Woeste used #2 Dense Southern Pine for testing (which is greater in strength than the #2 material found in the local lumber yard).

The plies were nailed together with 12d nails, in a specific pattern. They were placed with two nails every foot outside of the spliced area, and four inches on center in the four feet of splice zone (the area between the shortest and longest members). Each pair of nails was staggered from the previous pair, in a specific pattern.

Provided the columns in the photo are nailed adequately to match the testing (anyone interested in taking this bet?), the results of the test, adjusted downward from the difference in strength from the use of #2 grade lumber rather than #2 Dense, would probably be a fair approximation of strength.

The results from the column testing, compared the strength of the nail-laminated columns, to the values of 6×6 #2 Southern Pine solid sawn columns. The results of the tests showed the nailed up columns were only 64% as strong in bending, as a solid sawn column! The test results were compared against testing of other columns which used reinforced splices (either with 5” x 24” 20 gauge flat steel plate, or with pressed in “truss plates”). These comparisons demonstrate the discontinuous (non-reinforced) joint between the vertical members is the weakest link of the nail laminated wall columns.

While I do not know the dimensions or climactic loading of the building in question, I have seen another photo of this building which leads me to believe the building is 14 to 16 feet in height.

My opinion? Based upon what I can see, this building is going to require some serious structural engineered repairs to the columns, in order to be adequate to carry the loads.  And it won’t be cheap, the engineer fees nor the repairs.

A Mezzanine for Your Barndominium
A mezzanine is a common design feature found in al...
Poles for Pole Barns
Some days it seems there are nearly as many possib...
Perma Column vs. Pressure Treated
Hansen Pole Buildings’ Designer Rick has been work...

2 thoughts on “Pole Barn Detective: Is it a Glulam?”