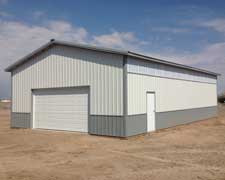 Hansen Pole Buildings sells pole building kit packages and materials directly from our website. We collect sales taxes from clients who are building in South Dakota and Washington states, but not from people who live in other states. Under the law, states can only require businesses to collect sales taxes if they have a physical presence (also known as nexus) in the state.

As a result, many online sales are essentially tax-free.

But the purchases aren’t really tax free under the law.

Buy anything on the Internet lately without paying sales tax? In all but a few states, you’re probably a tax cheat.

That’s right, even if Internet retailers don’t collect internet sales tax at the time of the purchase; you’re required by law to pay it in 45 states and the District of Columbia.

In states with sales taxes, if you buy something from an out-of-state retailer and don’t pay taxes, you are supposed to pay those taxes when you file your state tax return, said Neal Osten, director the Washington office of the National Conference of State Legislatures.

Only Delaware, Montana, New Hampshire and Oregon have no sales tax. Alaska has no state sales tax but does have local ones.

Here’s the problem for states: hardly anyone pays the tax, and there’s not much states can do about it.

Unpaid sales taxes are usually referred to as “use taxes” on state income tax returns. Use taxes apply to purchases made over Internet, from catalogs, television and radio ads and purchases made directly from out-of-state companies. State officials, however, complain few people pay these taxes, Olsten said.

“I do know about three people that comply with that,” says Sen. Mike Enzi, R-Wyoming.

As I am writing this, the Senate has just passed a bill Monday (sponsored by Enzi) making it easier for states to collect sales taxes for online purchases. While some of the nation’s largest retailers are rejoicing, businesses such as ours worry we will be swamped by new requirements from faraway states.  Many small businesses will be forced into a position of having to add another employee or employees, in order to keep up with the added burdens of collecting and remitting taxes, along with all of the extra paperwork, to jurisdictions all over the country.

Enzi’s bill would empower states to require businesses to collect taxes for products they sell on the Internet, in catalogs and through radio and TV ads. Under the bill, the internet sales tax would be sent to the states where a shopper lives.

Businesses with less than $1 million a year in out-of-state sales would be exempt.

Opponents say the bill doesn’t do enough to protect small businesses. EBay wants to exempt businesses from collecting internet sales tax with less than $10 million in sales or fewer than 50 employees.

“Complying and living under the tax laws of 50 states is a major undertaking because the process of complying with tax law goes far beyond just filling out the right forms,” said Brian Bieron, eBay’s senior director of global public policy. “You have to deal with the fact that all of these government agencies can audit you and can question you and can actually take you into court and sue you if they think you are doing something wrong.”

Our position – we always encourage our clients to contact their local taxing authority and to pay any use taxes due on their purchase, internet sales tax or otherwise. We do not believe in tax avoidance; however we also do not believe it is fair to place the burden of multi-state tax collection upon businesses such as ours. The added cost of staffing, means increased costs to our clients, all to pay for the collection of taxes!

Pole Barn Guru Wednesday!
Bonus Wednesday! The Pole Barn Guru has been inund...
Upgraded Pole Building
Upgraded Building at No Additional Cost If you se...
Pole Barn Prices: I Feel Your Pain
Being in the pole barn blog writing business, I he...