My oldest step-son, Jake is a very smart lad and teaches high school physics. He does his part to keep students involved, including having created a Facebook page “Mr. Roarks Science Group”.

In a recent post he wrote: “One of the science “facts” I always hear is that water spins down a drain or toilet clockwise in the northern hemisphere and counterclockwise in the southern hemisphere due to the coriolis effect. The basis of this is in the fact that Coriolis drift is responsible for air and ocean water movements across the surface of the earth. Coriolis drift happens because as you change latitude toward one of the poles from the equator, the earth beneath you is actually spinning a little slower. Because objects tend to keep moving in the speed and direction they started (yay inertia) and fluids like air and water are not easily slowed down by friction with the ground, air masses and ocean currents will curve over long distances – toward the east as it moves toward the poles and toward the west as it moves toward the equator. This plus the fact the change in velocity over such a small distance would be insignificant shows that the drain thing is ridiculous. Water goes down your drain based on the shape of the drain, how level the sink/toilet is and if there is more water shooting into it or not.”

All of this got me to pondering, why do trees, tend to twist? Could it be the Coriolis effect? To see for yourself, take a walk through a coniferous forest, looking for dead trees which have shed their bark. In the northern hemisphere, the spirals run from lower right to upper left (clockwise if looking down on the tree from space). Getting on my magical Google suit, I fired up the laptop and started to search for answers.

The best answer online I was able to source was from the Oct/Nov 1998 edition of National Wildlife: 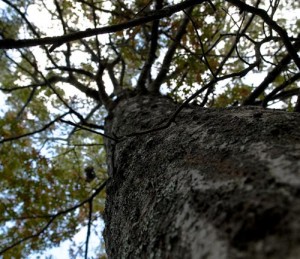 “Something strange happens to conifers in the Northern Hemisphere as they age: Their grain gradually spirals to the right, up the tree. In the Southern Hemisphere, however, tree spirals tend to be aimed to the left. Research has indicated these tendencies are inherited, but why? What is the evolutionary advantage?

Norwegian foresters Sondre Skatter and Bohumil Kucera speculate in part that over time, the trees have responded to being broken and twisted by the wind. “Conifers are exposed to a prevailing torque in the counterclockwise direction in the Northern Hemisphere and a clockwise torque in the Southern Hemisphere,” points out Skatter. That’s because more branches and needles grow on the sunny side of trees–the south side for trees in Earth’s northern half and the north side for those on the other half of the globe. Over time, natural selection may have favored trees with grain that helps the foliage cope with the wind, which tends to come from the west. “Trees with opposite spiral direction tend to snap during storms,” he explains. “At least that’s the theory.””

Now I will put forth my own theory….phototropism is when the photoreceptors of plants cause them to “move” towards the light by means of chemical changes in the cell wall structure which cause the cells on the dark side of the stem to expand, so the stem as a whole bends towards the light.

In the Northern Hemisphere, the sun “rises” in the east, travels across the southern sky and sets in the west. For a plant to “follow” the sun, it would have to move clockwise, when looked down upon. This following effort, could result in a minute daily permanent rotation, which over years could very well be the twist seen in the forest.

Now why is any of this important? Because sawn lumber has a natural tendency to twist, it is just trying to become what it was in nature – part of a tree!  And this is why, no matter how “pretty” your lumber looked when it was delivered, the best thing you can do with it once you have it “on-site”, is to get your building (or whatever you are building), constructed as soon as possible. Left to “sit”, especially if exposed to the weather, allows the lumber to…yes, try to twist to become once again…a tree.