Thanks to Google, I get Email alerts when new articles appear on line about pole barns. Sadly, far too many of them are from online versions of newspapers and involve fires in horse barns. Usually, but not always, these fires were entirely preventable.

My daughter Bailey (https://www.baileymombtraining.com/) is a professional horse trainer and she would be devastated if a fire was to injure, or worse yet, kill one of her or her client’s horses.

By one estimate, more than 4,500 barn fires break out each year in the United States.

Responsible horse owners, who would do anything to protect their horses from injury and illness, too often leave fire prevention entirely to chance.

The same thing happens in barn fires, as in Backdraft. In the event of a barn fire, opening doors can result in being launched into the air by back drafts from inside.  Plus the outside air oxygenates the fire, accelerating the inferno.

Barn fires are less likely today than in the era before electricity, when kerosene lanterns were routinely used to light the way during predawn and evening barn chores (think Mrs. O’Leary’s cow and the Great Chicago Fire).

While electric lighting is safer, electrical appliances continue to be among the primary igniters of barn fires. They’re just different heat sources allowed to get too dose to the combustible materials inevitably part of the stable environment.

Write out your Safety Plan!

A serious risk-reduction effort begins with a written fire-safety plan for the property. Write it out, so changes on the to-do list actually get done, and can be crossed off as completed. Often insurers or local fire department experts will walk through a barn to identify hazards and give suggestions for reducing fire risk. Some large riding and show facilities are required to have frequent fire inspections. For smaller facilities, regular inspections (at least twice yearly) are not a bad practice.

With flammable bedding, hay and structural wood contained within most stables, horses and combustible materials would seem to be inseparable. Additionally, many of the normal elements of stable surroundings — landscaping plants, dried vegetation, bedding-filled manure heaps and gasoline-powered machinery — provide ready tinder for fires started elsewhere and spread by wind. One of the most readily accomplished fire-prevention measures, then, is to reduce the potential fuel for a barn fire inside and outside buildings. 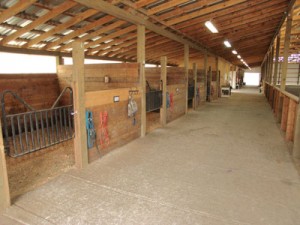 Make regular stable cleaning a priority. Remove refuse, chaff and other barn wastes which can feed and spread a fire. Check storage areas for flammables, such as pesticides, cleaning fluids and paints, and dispose of unneeded items according to county hazardous-waste guidelines. Keep necessary flammables in approved containers well away from heat sources.

Store hay and bedding away from the stabling area. Place only small amounts in the main barn, and replenish when needed.

Clear shrubbery from around the barn, and keep surroundings mowed or trimmed to eliminate flame-spreading dead vegetation. Where wildfires are a potential problem, follow this guideline from a U.S. Forest Service staffer: Clear a distance around buildings three times the height of the burnable material plus 10 feet for every 15 degrees of slope on the land. Thus, if the vegetation is eight feet tall (3 X 8 = 24) on a 30-degree slope (30 + 15 = .2 X 10 = 20); clear a radius of 44 feet (24 + 20 = 44) around the barn.

Humans cause more fires than electricity does.

Human intent and human error are the two major causes of barn fires; electrical failures and lightning strikes are the next most common fire starters.

Minimize opportunity for human error. Forbid smoking in and near the barn.  Some trainers have “smoking allowed here only” designated areas. Exercise extreme caution in allowing mechanical heat sources, such as welders and propane torches, to be used for repairs and construction around horse stabling. A discarded cigarette can smolder unnoticed to ignite bedding, hay or yard litter. A welding spark or torch flame may touch off an immediate conflagration in a chaff or litter-filled area.

Treat every gas powered vehicle and machine as if it were a lighted match.

For the same reason fire departments warn against parking vehicles on leaf piles, avoid parking tractors or other farm equipment near piles of bedding, hay or litter in which hot engines can spark fires. Park all powered machinery and store all fuel outside the stable at all times. The convenience of having the machinery nearby is not worth the risk of engine heat, backfires and fuel spills.

Thoroughly check and immediately correct weaknesses in the electrical system, and make sure the work is done by a licensed electrician who knows how the system will be used. Frayed wiring, short circuits and other electrical problems cause one out of every seven barn fires. In addition to deterioration due to aging and weathering, wiring which is not run in conduit, is subject to direct damage by chewing rodents (and sometimes horses), equipment collisions, and wear and tear. Have additional electrical outlets installed on new circuits instead of relying on extension cords. For the utmost safety, have all wiring run through conduit and operating on circuit breakers which, unlike fuses, can’t be reset until the triggering electrical problem is fixed. In wash stalls and other watery areas, have ground-fault circuit interrupters installed. If living quarters are part of the barn complex, include those electrical and heating systems in maintenance programs.

Keep stable appliances to a minimum. Do not use space heaters in the tack room or barn. Some barns restrict radio use to battery-powered models. Overloaded electrical circuits can heat wiring to ignition levels without the ability to be aware of the failure. Cage light bulbs to prevent breakage and cover switches so roaming horses can’t turn them on. If laundry is being done in the stable, install and vent the dryer well away from combustible materials, and keep its vent lint-free.

Sounds like alot?  It is – but this is not all you can do. Come back tomorrow for “the rest of the story” on preventing horse barn fires.