If you missed my blog yesterday – it would behoove you to go back and pick up Part I on Horse Barn Fires.  As I mentioned –  I get Email alerts when new articles appear on line about pole barns. Sadly, far too many of them involve fires in horse barns. Usually, but not always, these fires were entirely preventable.

By one estimate, more than 4,500 barn fires break out each year in the United States.

Responsible horse owners, who would do anything to protect their horses from injury and illness, too often leave fire prevention entirely to chance.

Continuing on from yesterday’s blog…

For protection against nature’s fire starter, install lightning rods on stables and outbuildings, and check them periodically to be sure they’re in good condition. Lightning rods on rooftop high points are connected by cables which run to ground to divert the energy of a strike away from the structure itself. Some barn owners choose not to use lightning rods, mistakenly believing they attract lightning, but the devices simply conduct lightning which would have hit a structure anyway. Lightning rods, which have been used since colonial days, require proper installation and grounding to carry out their purpose. Inadequate cables, wrongly placed rods and grounding failures all interfere with the system’s ability to relay the voltage into the ground. A vehicle parked against a system cable interferes with the grounding, as do phone cables, television antennas or satellite dishes connected to it. If considering having lightning rods installed, contact local fire department or county extension office for references to reliable services.

Guard against spontaneous combustion. Self-ignition can occur in large masses of organic material, such as piles of wood shavings, manure piles and tightly packed stacks of insufficiently cured hay. In damp hay, decomposition begins near the center of the mass but, because there’s no ventilation, the heat thrown off by the process builds until the ignition point for the drier surface hay is reached. The spontaneous fire which erupts may occur several days after the storage area has been filled. If storing large amounts of new hay during the summer, be sure it is well cured before it gets into a hay loft. Also avoid leaving piles of other organic material undisturbed for long periods of time.

What’s the Chance of a fire? 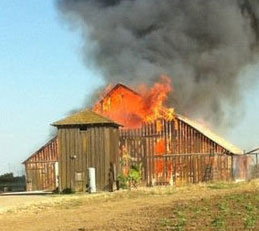 Human error and plain bad luck happen, making fire a very slim but still real possibility in well-managed stables. Reducing the chance of a barn fire includes preemptive strategies to hit the fire before it can take hold and emergency actions to ensure the barn’s most valuable contents — the horses and people — come out intact.

Install a warning system. Consult with a fire-safety expert and electrician about the most reliable sensing system. The choice is between smoke detectors and heat sensors. Both sound alarms at the first flicker of fire. But heat sensors may be more reliable in dusty stable conditions where smoke alarms may read the particles as smoke and give off false alarms.

Load up on the ABC’s!

Mount fire extinguishers at key points around the stable. Although extinguishers are useless against established fires, they are effective at ignition. Consult with a fire-safety expert for recommendations on the optimum number and placement of extinguishers, which should be the “all-purpose” dry-chemical ABC type. Inspect them at the intervals described in the operator’s manual, and have them recharged immediately if they fail a routine check. In an emergency, call the fire department first before picking up an extinguisher. Even when a blaze appears to be out, notify the local fire department immediately — a requirement of some local fire codes – as five percent of barn fires result from rekindling of a fire believed to be extinguished.

Can a Fire Truck Easily Get to You?

Make your property accessible to emergency services. See the street address and/or name is clearly visible at the property entrance and large enough to be noticed by drivers of speeding emergency vehicles. Check to see lanes, gates and stream crossings can accommodate fire trucks and there’s a clear right-of-way for them to reach all buildings.

Equip buildings with lifesaving tools. Keep a halter and lead shank on every stall door, ready to lead horses to safety. Have a fully charged cell phone on the premises to call emergency services even if phone lines burn out. Consider installing a backup generator to light the barn aisles and/or pump well water even if electricity is cut off. If using water tanks for fire protection, keep them completely full at all times, both for the water they provide and to prevent their destruction by a nearby blaze.

Familiarize horses with emergency procedures. The more obedient horses are to the entire general handling expectations of leading, standing, loading and so forth, the better control over them during unsettling circumstances. Practice evacuating horses from the stable, and make the experience as close to the real thing as possible.

No barn can be 100 percent fireproof, but they can be constructed to make safety the foremost concern.

A sprinkler system can result in a 10 percent discount in an insurance premium. Reevaluate insurance coverage periodically, to make sure limits are adequate to cover full replacement costs.

While wood is flammable, the heavy timbers which support pole barns will take a lot to burn through. Investigate using fire-retardant lumber. Select steel roofing and siding.

While structural steel and masonry are far less flammable building choices, they’re not as “kind” to horses stabled in direct contact with them. Besides higher up-front costs, having to isolate concrete footings and steel or concrete framing members (or work around them) becomes problematic.

Investigate the feasibility and effectiveness of a sprinkler system. Sprinkler system sensors are not wrongly triggered by dust or fumes, with the odds of failure occurring during a system’s 40-year life span being one in three million. Despite their good reputation, they are rarely found in boarding stables and private barns. While sprinkler systems can cost as much as two dollar per square foot, installed, this is insignificant in relationship to the value of the horses.

Horse-barn owners who have been through a fire are understandably more vigilant the second time around and often change the way they run their operations. Universally, they cease storing large quantities of hay in the same buildings with their horses. Those who previously had hay lofts, build loftless replacements.

Consider more plentiful quantities of large exterior doors, as well as exterior stall doors from each stall, which can be easily opened from outside.

Spending a few extra dollars initially, for good horse barn design, is a small investment to avoid the grief of a tragic barn fire. I’ve seen far too many stall barns designed inadequately for the horses, the humans, and which could prevent or minimize devastating losses.

How Energy Efficient Are Pole Buildings? Key Insul...
If you’re thinking about building a pole barn home...
Vinyl Siding for Pole Barns
When it comes to pole barns (or more appropriately...
Gambrel Barndominium Done Differently
What I Would Have Done Differently With Our Gambre...