Home >> About The Pole Barn Guru >> Weather or Not

My maternal grandfather passed away at age 82, back in December 1990. Now the grandparents had been married for nearly 60 years, but grams still had lots of life in her. In 1991 Grandma Jerene started dating a widower from her church, Bob.

Bob was a retired meteorologist – he had run the National Weather Service (NWS) station at the international airport for decades.

When I lived in Oregon in the 1980’s one of the Portland television stations used to dress up a cat in clothes appropriate for the day’s weather. The cat’s name? …. Bob 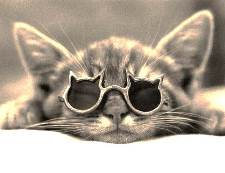 Bob had quite a sense of humor. He once told me a story (which may actually have been true) about a study done by the NWS. In this study a team of meteorologists was pitted against a team of monkeys to determine which group could predict the weather with the greatest degree of accuracy. As the monkeys obviously could not speak, they threw darts at a dart board with “weather tags” on it.

The end result – the monkeys out predicted the weathermen!

Obviously weather is unpredictable, as reported by one of our clients, Daryl:

“I just wanted to say thanks, you guys have been great to work with. My pole barn kit project has ran smooth other than the weather and that is out of our control. The Book you guys send out with each kit has helped a lot.

And please tell everyone at Hansen you guys do a great job.”

We’d love to be able to include a “guarantee of good weather” to each and every one of our clients during the construction of their new pole buildings. In this regard, if we could do as good as Bob the Weather Cat’s team of primates, we’d be doing great!