Home >> Pole Barn Planning >> Windows: Fill Them up with Gas!

Windows: Fill Them up with Gas!

Recently I wrote a blog post about Low-E windows. So Mrs. Guru, being an inquiring soul, read it, and wanted to know if our windows were gas filled.

Why would anyone want to fill the space between panes of window glass to begin with?

Well, as air transfers heat quickly, specific gases are used between window panes to improve energy efficiency. Both krypton and argon transfer heat less quickly than ordinary air, increasing the insulating value of the window. Krypton has better insulating properties than argon, but is more prone to leak.

Krypton performs best as an insulator when the spacing between the panes of glass is less than half an inch. Argon can be used in windows which have a wider space between window panes. For this reason, argon is often used for double pane windows while krypton is more often found in triple pane windows. 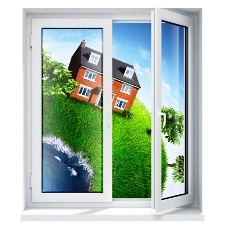 Compare cost against savings. Argon filled windows can save money over time with a lower energy bill, but if paying too much up front, the savings will never cover the investment. In addition, the argon does not help to deflect many of the sun’s ultraviolet rays, which aid in heating up your pole building. The additional heating will drive up summer cooling bills. If picking argon windows, get one with Low E coating to help reflect the sun’s rays.

A concern with argon-filled windows is an issue of leakage. Argon is a colorless and odorless gas, so it cannot be detected by humans, which means the argon could leak from the windows over time and never be noticed. One cause of leakage is an improper window seal. If the window seal has even a small gap in it, the argon will escape. Research on how the window is originally filled in the factory. A variety of methods, including a one-hole and two-hole method exist for placing argon in the window. Each method can affect how well the argon is trapped in the window. A one-hole method means only one hole was used to pump in the argon and gives the window less points to fail. The two-hole method means the seal had two holes to pump in the argon and there are twice the possible failure points.

Higher altitudes bring specific window concerns. Over 2,500 feet in altitude above where the window was manufactured? A capillary or breather tube should be added to prevent the change in altitude from causing a seal failure. Argon gas diffuses through the tubes very rapidly, and, by the time it reaches your home, there may not be any gas left. Window manufacturers are not liable because the window does not have to be tested for the argon content after it leaves the factory. Ensure, if building at a high altitude, the windows were manufactured at a similar altitude.

Spacing is another factor for argon retention. The spacer is the piece at the edge of the window which separates each pane of glass. Metal spacers are common and use a rubber compound to seal. Metal spacers are not as good as they will allow gas to leak out over time and they conduct both heat and sound. Consider non-metal synthetic spacers which seal better and will not allow the gas to escape.

With more pole buildings being used with climate controlled interiors, windows become more significant. Making careful choices and doing some research can either pay off with big savings, or involve costs which can never be recouped.

Magnetic Riding Arenas
When I lived in “the Hood” in Salem, Oregon in the...
Rain-screen Siding for Post Frame Barndominiums
Horizontal exterior sidings like wood clapboards, ...
Tall Door in a Low Height Restriction
In an attempt to preserve “pristineness” of neighb...