Yesterday’s blog gave credit (good or bad) to Mr. Sales and Martha, his “paddle”. There is more to the story on paddle blocks. 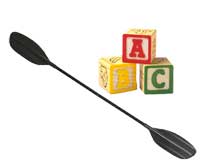 Besides the obvious problem of splitting a paddle block with numerous nails, there are some other issues caused by the use of these blocks.

Pole building eave height is the measure from the bottom of the pressure preservative treated skirt board, to the underside of the roofing at the outside of the sidewall columns. This means the interior clear height, is reduced by the thickness of any concrete slab, the thickness of the end of the roof trusses AND (when purlins go over the top of the trusses), the height of the roof purlins.

Having roof purlins over the top of the trusses, costs usable space inside of the building.

When using a structural design where the roof purlins overlap at each truss, the roof steel cannot be pre-drilled. Pre-drilling has many benefits – perfectly straight screw lines and it makes it obvious to the installer when a screw misses a roof purlin. With staggered roof purlins, all too often a leak occurs when the 1-1/2” offset at the overlaps is not accounted for.

In the paddle block scenario, the prefabricated roof trusses are spaced apart by 5-1/2 inches. Even though there are two trusses per column, they are not physically joined to each other. The paddle blocks are not creating a load transfer. As the trusses do not load share, under extreme snow load conditions, the weaker of the two trusses can fail, creating a collapse. When the trusses are properly nailed together, the loads are carried by the pair of trusses.

But are there benefits to the paddle block system? Many builders, having never tried another method, believe the use of paddle blocks and trusses on each side of a column makes it quicker and easier to raise the truss assembly of two sets of trusses with the roof framing. They also believe it to be overly time consuming to install roof purlins to the sides of the trusses with joist hangers.

When I was building, we forced our crews (I had 35 crews in 6 states) to switch away from the paddle block roof design, to pre-drilled roofs with hangers for the purlins. Every crew moaned about it before they tried it. After a few buildings of doing it the “new” way, they universally declared they would not go back to the paddle block method. They found the new way to be both faster and to virtually eliminate the chances of a screw missing a roof purlin and creating a leak.

Hay Barn Loft Removal, Screw vs Nails, and Find a ...
Today's "ask the Pole Barn Guru" visits questions ...
Let's Talk Building Diaphragms
When it comes to pole buildings, a diaphragm is a ...
Unseen Danger of Hiring a Building Contractor
Earlier this year I had written about a post frame...