Home >> About The Pole Barn Guru >> The 200th Construction Blog

Just over nine months ago, I embarked upon what has turned out to be a fascinating journey – writing this blog.

Originally I thought 100 or maybe 150 posts down the pike, I’d be entirely out of subjects to write about. Seriously – how is it anyone can find so much to write about pole buildings?

It rather reminds me of a story from when I first owned my own pole building business. I got started back in 1981, as a one man show. By 1983, business was booming and I needed help handling the huge influx of clients.

When I moved to Oregon, from Spokane, in 1979, I had taken a job managing the roof truss manufacturing facility for Lucas Plywood and Lumber, in Salem. I quickly became friends with one of the lumber salesmen there – Mike Oglevie. Mike and I were about the same age, we were both married young and were each raising two children – a girl and a boy. 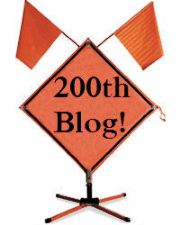 When I needed help, I called upon Mike. Mike told me he would come to work for me, helping to sell pole building kit packages, because I was his friend and he trusted me, however he was certain within a year we would have sold every pole building there was to be sold, and we would both be out of jobs! For Mike, it was a career he would be in for over 25 years! Somewhere out there is the last pole building, but not within my lifetime (or Mike’s).

Blogs have turned out to be the same way.  Every time one gets written, it seems I find two more topics to write about.

My wife laughs at me – she knows I have literally hundreds of post it notes covered with future topics all over my computer and desk! Subjects have come from all different sources – the Building Designers at Hansen Buildings, builders, competitors, building officials and most importantly… clients.

These blog posts have resulted in my being referenced by Building Officials, requests to write articles for magazines and other publications, as well as speaking engagements. I’ve learned a lot, as I like to do research for many of them. If I am going to write on a topic, I want to do the best job to impart the most accurate and most recent information. This has also become one of the most widely read construction industry blogs on the planet!

Have a topic which I have not covered? Please let me know and every reasonable effort will be made to address it. In the meantime, off to write #201!