Home >> Building Styles and Designs >> Solar Panels & Shingles: Not a Marriage Made in Heaven

Solar Panels & Shingles: Not a Marriage Made in Heaven

An increasing number of new pole building owners consider installing solar roofing panels in order to harness solar energy and generate electricity for their new buildings. The traditional approach was based on installing heavy crystalline solar panels on top of an asphalt shingle roof. Shingles are an oil based roofing system with a relatively short lifespan.

This approach has generally worked for a while. Roof penetrations, needed for the installation of solar panels mounting system made to an asphalt shingle roof, increased the likelihood of premature roof leaks down the road, and shortened the already-too-short lifespan of the asphalt shingle roof.

The main problem associated with general/conventional solar roofing systems often seen on some pole buildings around the country, is an asphalt shingle roof is likely to fail much sooner than the solar panels will.

Picture a scenario in which a building owner spends a large amount of money to install a new crystalline solar panel system on their new asphalt shingle roof. It is likely within just a few years the roof will fail, due to roof leaks caused in part by roof penetrations made during the solar system installation. 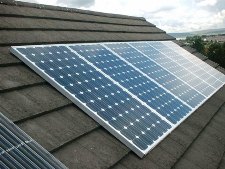 When such a situation occurs, the building owners will be faced not only with earlier than expected re-roofing expenses, but also with having to pay for a complete removal of solar panels, and for their re-installation.

Further complicating this situation is re-roofing, and solar panel dismantling and reinstalling of solar panels MUST be coordinated and simultaneously performed by both the roofer and the solar panel installer.

The roofer, only paid for the installation of a new roof, will 99% of the time make solar panel dismantling and reinstallation errors which could cause irreparable damage to solar panels.

Bear in mind any roofing warranty most of the time will not cover damages to the solar equipment, let alone the possible short-circuit of the solar wiring situations.

The additional solar panel dismantling and reinstallation cost associated with these procedures is just as high as the expected cost of a new roof itself.

Consider this situation: an apprentice electrician needs four years or more of schooling and work experience. This is like an undergraduate degree. Master electrician, another 4 years. Electricians usually charge $75-100 per man-hour and it takes two electricians and two days – one to remove the panels, and another to put them back on.

Shingle roofing manufacturers are pursing the solar roofing market. Their latest product, a solar shingle roofing system, uses thin-film solar panel technology in combination with conventional asphalt shingles. However, the proponents of green and environmentally friendly building technologies are likely to be disappointed, because the asphalt shingle underneath the solar panel contains petroleum, and is not going to last as long as a far better roofing choice – steel. Come back tomorrow and I’ll discuss the advantages of using steel roofing with solar panels.