A request we receive frequently is for skylights to be installed in the steel covered roofs of our pole buildings.

My first thoughts go back to a building I worked inside of over the winter of 1980-81. About 20 years old, the building had a steel roof with numerous fiberglass (actually Fiberglass Reinforced Plastic or FRP) panels in the roof. These panels were designed and placed with the intent of allowing natural light into this very large building. The operative word here being “were”.

FRP panels are strong mold-resistant sheets. Over time the glazed pigmented seal applied during the manufacturing process can crack causing the structural breakdown of fiberglass resin by weathering. In the case of this particular building, the skylights had deteriorated to a less than lovely yellow color, allowing very little light transmission. Lateral loads being transferred through the roof from wind had elongated the holes around the screws, causing numerous roof leaks.

Brittleness over time is another issue with FRP. At the first truss manufacturing plant I owned, we constructed a new building in 1982, with FRP panels at the top of the south facing sidewall. The idea was to be able to gain natural lighting. Within a matter of just a few years, the panels had yellowed and become brittle. Local kids, out for “fun” were throwing rocks through the panels! 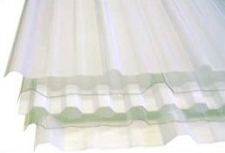 Available technologies have improved. For use in pole buildings, most instances where FRP panels would have been used, the work is now being done by polycarbonates.

Polycarbonate panels are designed specifically to match up to the metal panel profile. With a high performance glazing which stands up to punishing exterior applications, Polycarbonate Panels offer multiple advantages over traditional FRP panels: up to 20 times greater impact resistance, the highest light transmission rates, the lowest yellowing index, the highest load rating, and the highest resistance to wind uplift-outstanding properties confirmed in accredited laboratory testing and in installations worldwide since 1984. Polycarbonate panels are virtually unbreakable, they self-extinguish if exposed to flame, are hail resistant and are Underwriters Laboratory (UL) 580 Class 90 recognized.

Polycarbonate roof panels are normally used as in-plane translucent panels and are used with steel panels. Instead, we recommend these skylights be used in the walls as eave lights to allow light into the building to prevent anyone from walking on these panels.

If you are really planning on using polycarbonate roof panels, then you cannot insulate the roof in these areas, or you will block all the light. Roof areas without a good vapor barrier, which would be provided by properly installed insulation, are prone to condensation issues as well. You’ll also have to take some precautions about thermal movement. Polycarbonate panels do expand and contract much more than steel panels and they are much weaker and deflect more.

We’ve had an engineer perform full scale testing of steel panels similar to what is used on your new Hansen Pole Building (our tests were performed using thinner 30 gauge steel). These tests resulted in shear values for these panels being published in the National Frame Builders Association (NFBA) Post-Frame Building Design Manual. With a minimum allowable shear strength of 110 pounds per lineal foot, this steel is identical in strength to 7/16” oriented strand board (osb) installed in an unblocked diaphragm (no blocking at the seams between the sheets of osb).

Properly installed steel roofing, has the shear strength to be able to transfer loads induced by wind or seismic forces across the roof, through the building endwalls, to the ground. Herein lies the issue with light panels (either FRP or Polycarbonate).  They have no shear strength. In adding light panels, the structural integrity of the roof could be compromised. Under lateral loads, the panels could fracture or buckle, or the building frame itself could be overstressed.

There ARE some solutions as well as alternatives. Least costly would be to utilize light panels at the top of one or both sidewalls, or in the triangle area of one or both gable ends. Another affordable option would be to use a translucent ridge cap.

If light panels absolutely must be installed in the plane of the roof as skylights, the area can be reinforced by using steel strapping as an X from truss to truss on top of the roof purlins. This X will be seen through the light panels in the roof.  Aesthetics of the roof may be a consideration, especially with steeper sloped roofs where it is easily seen from the ground.  Also, while this solution adds to the cost of materials, as well as slows installation, it does afford a solution.