Say No to Ring Shank Nails on Steel Roofing and Siding

As we near the end of 2011, I’ve been browsing various websites from the pole building industry.

When I first entered the post frame business in 1980, nearly everyone was attaching steel roofing and siding to purlins and girts using ring shank nails with waffle heads, with rubber washers. It only took a couple of years for screw fasteners to become widely accepted in the industry.

Over 30 years later, I am reading information on the website of one of the largest post frame building companies in America. All of this is direct quotes, you decide if it makes sense to you:

“…… recognizes that the industry is changing and we are seeing a progression to screw fasteners in the market place.”

“We will continue to follow the philosophy that a nailed roof is the best application. The nail is on the rib of the steel and the rib will shed the water away from the nail. If you put a fastener in the pan, on the roof, then you have a higher chance for a leak, because this is where the water runs.”

“For over 26 years …… has used nails due to it being the cost effective choice and the efficiency of nailing the steel on the building.”

“…….. recognizes that many clients may ask the questions about screwing on the rib of the steel. This is not an application that (this unnamed company)……. Or Fabral can support for the following reasons. 1. The nail on the roof has a specially designed silicone washer that provides a better seal on the steel rib, is larger to cover more area, and will not dry out as fast as the neoprene washer on the screw.”

Now the information above got me exploring on a more in-depth search. On the website of maybe the largest post frame builder in American, I found:

“Be prepared for the aftermath if you choose a builder that uses steel screws as fasteners. The screws – even those that are painted – become gouged and stripped when fastened. Because steel forms red rust when it’s exposed to air and water, it is not a practical choice for a fastener, especially on roof panels.

Our double hot-dipped galvanized ring shank nails include an EPDM (synthetic rubber) washer. These washers – highly resistant to deterioration by ultraviolet rays – remain flexible in extreme heat or cold. EPDM washers form an excellent seal between the nail and the steel.”

Starting from real life experience….Hansen Buildings, five years ago, purchased a piece of property in Roberts County, South Dakota. On the property is a 96’ x 96’ pole building about 20 years old at the time of acquisition. All of the steel roofing and siding was installed using ring shank nails. At the first rainfall, it was found the roof leaked like a sieve. There were hundreds of distinct leak “drip spots” on the building floor.

The choices were to replace the entire roof (best solution, however it would have been extremely costly), or repair what was there. I would never espouse the use of silicone or other sealants to repair roof leaks, however this was an extreme case and aesthetically, the sealed holes would not be visible from the ground.

A friend of mine was an engineer in the sealant industry. I described the problem to him and he fixed us up with two cases of what he described as being, “the best sealant in the world”.

Appropriately armed, the 6656 nails on the roof were attacked. Investigation found several reasons for the leaks, they included – nails which were as much as ½” above the ribs of the steel; nails with missing heads; nails where the washers had deteriorated; nails which had just plain missed the purlins in the beginning. Every nail head was rusted and staining the surrounding steel roofing.

Every last screw had to be sealed; there was no trusting any of them to not be a leaker.

Hansen Buildings uses only screws with vulcanized grey Ethylene Propylene Diene Monomer (EPDM) beneath the heads, rather than neoprene rubber. In tests done by the German Rubber Industry Trade Association, EPDM as roofing was proven to last over 50 years. In the case of screws, the EPDM washer is further protected from weather with a domed flow cone washer.

From Fabral’s website, “The FabrOseal (FabrOseal is a registered trademark of Fabral) galvanized ring-shank nail, with its premium long-life silicone rubber gasket, assures a lasting seal and is the best nail available for steel panels when screws are not being used by the installer.” (The bold has been added by me)

Fabral’s installation instructions states, “Screws should be installed in the flat area of the panel adjacent to the ribs…” An installation of screws on top of the steel ribs would be incorrect.

Hansen Buildings also provides screws which are powder coated rather than painted. In powder coating the paint powder is electrostatically charged and the JS500 plated screw is electrically grounded, causing the charged powder to cling to it. When oven cured the powder melts and flows over the surface including under the head, where rust would normally start. The JS500 plating afford up to ten times the lifespan of zinc plated (galvanized) screws and the manufacturer warrants the properly installed color matched finishes to last the life of the steel panels, with no red rust!

After examining the facts, I just can’t find any benefit to steel roofing or siding being attached with nails, other than to whoever sold the building attempting to increase their profit margin, at the expense of a quality product for the end user.

In Walker and Woeste’s 1992 text Post-Frame Building Design, they highlight the results of tests by Johnston and Curtis in 1984, in which comparisons were done to determine the advantages of using screws to attach steel roofing instead of nails. The study concluded, “…roofing nails driven through the roofing ridges provide for relatively poor shear transfer into roof panels…”. “The study also noted that the shear transfer through the nail connectors has caused and will continue to cause leaks as openings around the nails enlarge with time. These openings also decrease the stiffness of the roof system.” 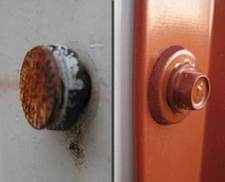 The study also concluded, “…screws should be superior to nails and this would be especially true under a repeated wind load on a building over a long time span.”

If all of this doesn’t convince you, come and look at the Hansen storage building.  One look at the ring shank nails on the walls and roof will have you convinced screws are the way to go.  Or take a close look at the attached photos.  Seeing is believing.