When I read this CNBC.com article, written by Colleen Kane, I immediately thought – why is it these folks aren’t just doing it the easy way?

Here is a brief overview of one of the homes – a barn located in Dallas, Texas: 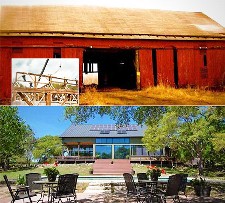 This structure existed for its first 150 years or so as a traditional German style bank barn (built into a hill and accessible from land at both upper and lower levels) in central Pennsylvania, until Heritage Restorations intervened. The cost of the barn conversion and its dismantling ran the current owner $110,000 in 2007.

The structure was transformed into a contemporary house by surrounding the sturdy post and beam barn skeleton with glass and stucco. This is one barn no one can call drafty due to structural insulated panel walls that ensure the house is energy efficient.

Other energy-efficient features include solar panels and tankless water heaters. The three-bedroom original Patterson homestead on the 4.17-acre property is now billed as a guesthouse, and also on the premises are a 1,600-square-foot workshop and a saltwater pool. The building is registered with the Texas Film Commission, so it has appeared in a Dell ad, and hosted a pool scene for an upcoming Richard Linklater film. Its current asking price, a cool $1.525 million for 4,360 square feet.

The easy way? Start from scratch with a pole barn!

Pole buildings can be easily adapted for virtually any purpose. Every feature incorporated in the “after” photo above, could have been designed into a brand new pole building. With comfortable options, a similarly sized pole barn would have been probably 1/3 of the cost of the dismantled 150 year old structure, and been code conforming from the start.

The new pole building could have been designed to the exact dimensions needed by the client, rather than having to work from those of an existing building!

Vehicle Lifts for Post Frame Buildings
A trending garage accessory is an addition of a ga...
Post Frame Purlin Blocking
Every time I begin to rest on my laurels and think...
Nanoo Nanoo
Nanoo Nanoo In today’s riveting episode of Pol...