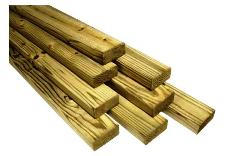 Need a piece of lumber? In most of the United States, you get one from your local lumber yard or “big box” store and do not have a choice as to whether the lumber is “green” (moisture content of over 19%) or dry. For the most part, what is available at the retail level is a regional dictate.

Historically, the green vs. dry battle has been a point of contention.

A great deal of attention was given at the Forest Products Laboratory in 1946 to problems arising from the use of green lumber in building construction. Sharp controversy developed between the Laboratory and that portion of the lumber industry which customarily manufactured and shipped unseasoned (green) lumber.

The statement, since widely quoted, “we still have not learned how to build good houses of unseasoned lumber” was made in a Laboratory report which was later withdrawn. An extensive “Program to Reduce Use of Green Lumber in Housing” was planned at the Laboratory, but never implemented. Although size standards were not a major part of the controversy, shrinkage in service was given as the principal drawback to the use of green construction lumber, thus emphasizing the relation of size to moisture content.

At about the same time was the case of the home owner in Virginia who sued for damages resulting from the use of green lumber in building his house. The court awarded him some $8,000 damages, but the award was set aside on appeal to a higher court.

There was also sharp controversy about whether or not building codes could legally set maximum moisture content values in lumber used in building construction. The argument was advanced that health and safety do not require dry lumber, and the building law could not go beyond health and safety requirements.

You may ask… why is green lumber even used? It is less expensive to produce green lumber than dry. Green lumber is softer than seasoned wood, it can be cut more easily, is not as likely to split and nails drive into it more easily.

A number of problems can result from the use of green lumber. Nail “pops” – as framing members dry and shrink, gaps are created between nailed together framing members, as well as between exterior or interior sheathing and framing members. Mold can begin to grow on green lumber before it is even used in construction. Airborne mold spores are found almost everywhere, and they can easily cause mold growth on wet wood surfaces.

In exposed areas, green lumber can be difficult to paint or stain, sap within the wood oozes out and causes discoloration and gaps between members (such as fascias) can result.

As it dries, wood shrinks considerably, and is prone to both “warp” and “check” (crack). Used in construction, problems may arise including warping the underlying structure and causing structural instability. Unlike lumber which has been dried at the mill, green lumber has not been treated with any substances which are designed to promote water and insect resistance. Green lumber is more subject to rot, and it can be viewed as a buffet by insects.

More often than not, the use of green lumber for framing material comes from lack of knowledge by the end user. For buildings where the finished quality makes a difference, dry lumber is the only sensible choice.

Construction Costs: It is Not Getting Any Cheaper
We’ve seen prices of materials creeping up fairly ...
Post Frame House Quote? Design Recommendations, an...
DEAR POLE BARN GURU: Is it possible to get a quote...
Beginning a Shouse Journey in Washington State Par...
A shouse (shop/house), barndominium or post frame ...