Home >> About The Pole Barn Guru >> Are We Addicted to Bad News?

Are We Addicted to Bad News?

As they say in journalism, “If it bleeds, it leads”.  It is important to remember the media’s goal is to capture eyeballs and all too often we are unable to turn our heads away from a train wreck.

“June’s miserable jobs report has put the fear of a double dip recession back into the markets. 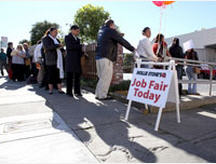 “Even the hours worked slipped. It’s just a horrific report. Unemployment going up is not good,” said Marc Chandler,Brown Brothers Harriman      chief currency strategist.”The U.S. economy added a paltry 18,000 jobs in June, and the unemployment rate climbed to 9.2 percent from 9.1 percent as laid off government   workers continued to join the ranks of the unemployed. There were also 44,000 fewer jobs created than previously reported for April and May.

What Ms. Domm failed to acknowledge is over 90% of those who want to work, are working! Later, in the very same story, it reports the private sector added more workers, than the government got rid of. We are indeed moving forward.

Admittedly, I personally spent too much time the past few years looking at the “empty” part of the glass, not the filled portion. I know a lot of people – and not a single one of them has lost their home to foreclosure. Many, just like me, experienced paper losses – we bought homes, had them double in value (on paper) and now their value has gone back to a realistic level. The “worth” of our retirement accounts soared, and then returned to reality. If it only ever existed on paper, did we actually lose it?

I, for one, am making the choice to move forward. The wood siding on my home and two pole barns was long overdue for painting – they are being painted now. I’m not flipping my house, I am living in my home and I intend to be comfortable, safe and secure while I do it.  And I plan on protecting my investments by improving my property in any way I can.  Whether this means painting the buildings I have, or new construction of a pole building to house my valuables, it’s time to make it happen.

When we signed up for our tour of duty on this planet, no one said it was going to be easy. Instead of wallowing in the muck and mire of the media, let’s pull ourselves up by our bootstraps and make something of ourselves.  Me, I’m moving on!

Spoof on Fax Machines: Fax....what's a Fax?
When I saw this as a headline in my LinkedIn group...
Cool Roofs
I’m not talking about roofs that look “cool”. Cool...
What is Adequate Eave and Ridge Ventilation?
CODE REQUIREMENTS FOR ATTIC VENTILATION Historica...