Back in 2006  Daniel Huang and Shawn Dougherty began the business mStation, making speakers and cases for iPods and mp3 players. Initially located in southern California, they decided to reduce their company’s real estate costs by setting up shop in Dougherty’s pole barn back in Kalamazoo, Michigan. This would allow them to make the best use of the $250,000 they’d bootstrapped. 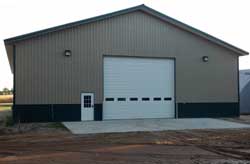 “I packed up, I went back to Michigan, I bought the house next to my family home and it had a 3,000 square foot pole barn on it,” says Dougherty, Mophie’s COO, in a Forbes magazine interview. Her family’s pole barn – and those of friendly neighbors – provided added space for the burgeoning company’s launch. “We were dropping containers on the property.”

The first year brought in $1 million in sales, selling predominantly in North America, and attracted about a half million dollar investment from NBA star Carmelo Anthony, who they later bought out. This capital allowed stock up on inventory, move from Kalamazoo to Paw Paw and acquire Mophie in a 2007 asset purchase.

Now I had never heard of either mStation or Mophie, an Apple device accessory company, which opened up a larger market for mStation. Their acquisition of Mophie gave them a global Apple retail presence.

In a nutshell, these really smart folks recognized every device is drawing power from the moment it is turned on, so they designed a supplemental power source, which is built into the device’s case.

Maybe your business ideas are as adventurous as Huang and Dougherty’s, and you might not have access to $250,000 for a startup. However a pole building might be part of the solution to getting off the ground and moving in an upward direction.

Available with a limitless supply of possible sizes and features, there is a pole building which could be just what your business ordered!