I’ve been doing some of my own research on solar power lately, and have found some interesting stuff. The real interesting part of this article is not in the cool solar product – it is on how to solve the problem they do not know they have with the pole barn (post frame) building in the background of their photo.

The city of Sandpoint, Idaho will start work soon on the first public pilot project with Solar Roadways Inc., the North Idaho startup which aims to transform roads, sidewalks and parking lots into heavy-duty solar surfaces capable of generating power and melting ice.

The city has received a $48,734 Idaho Gem Grant from the state Department of Commerce to install a 150-square-foot solar surface at Jeff Jones Town Square at Third Avenue and Main Street in downtown Sandpoint.

The Sandpoint Urban Renewal Agency is kicking in another $10,000 for the project, and Solar Roadways owners Scott and Julie Brusaw, of Sagle, will donate installation costs.

The solar surface will go down in June, according to the city’s project schedule.

“In addition to the potential for long-term economic development, this project will draw many visitors, locally, regionally, national and worldwide to view the project … drawing much needed tourism to other downtown businesses,” said Aaron Qualls, the city’s Planning and Economic Development director, in a March 29 letter to the urban renewal board.

The company also will benefit from the attention the pilot project is expected to attract, Scott Brusaw told city officials. “This will help lead to the building of a mass manufacturing facility in Idaho, where even more jobs will be created,” Brusaw said in a March 17 letter.

Solar Roadways also met this spring with officials at the University of Idaho to discuss a similar demonstration project on the Moscow campus. The university has applied for a grant from Avista Utilities to pursue their project. A location has not been selected.

The company raised over $2.26 million from the public in an Indiegogo crowd funding campaign and has used some of the money to hire employees and open an engineering and manufacturing shop at 721 Pine St. in Sandpoint.

The Brusaws believe their technology can transform U.S. highways and cityscapes into sprawling networks of energy generation and provide surfaces which are durable, safe and less expensive to maintain than concrete and asphalt.

The hexagon-shaped, inch-thick panels collect solar energy which can power heaters and lights under the glass, with electricity to spare. The Brusaws built a small parking pad next to their workshop using 108 of the panels, and it stayed free of snow and ice through the winter.

The panels also feature LED lights which can illuminate road lines and project warning signs onto a surface. In another application, electric vehicles would be able to recharge at rest stops, restaurants and other businesses which incorporate the solar road panels into their parking lots.

For those of us here in the great white north, this could be an interesting product.

Now, I’ve got you warmed up, here is the pole building tip, thanks to the Brusaws’ photo with their workshop.

What is wrong with the picture?

The entry door has wood jambs and probably only primed instead of painted is one, however it is not a solvable problem w 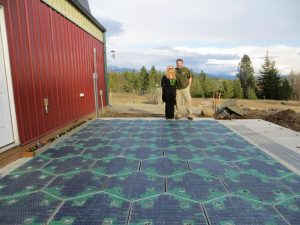 Look at the wall steel and you will see there are two overlaps to the right of the door which just do not appear to be laying down smoothly. This is an installation problem which can easily be solved.

Steel siding panels are designed for a 36-inch net coverage, no more, no less. The best installers are measuring along the wall as they place panels, to make sure the coverage is exactly 36 inches.

Here, at least two of the panels were placed with the overlap pushed too hard to the left, they probably do not cover all of the 36 inches and the overlapping edge of the steel panels is “riding up”.

To solve, remove all of the screws from one panel at a time except those along the far right (in this case) underlapping edge. Now push on the rib to the far left of the panel, towards the right. When the overlap fits tight place screws in the holes immediately to the right of the overlap.

Last, replace the screws in the field. Repeat this process on any other panels which are not overlapping as they should.