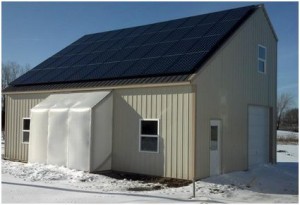 I am simply amazed at the sheer number of solar system installers who convince their clients they have to use standing seam steel roofing in order to attach the solar panels to the steel roofs. First – they are doing a total disservice to their clients by causing them to spend thousands (seriously) of dollars to get a roofing system which adds no extra value to their building. And secondly, I know the Internet is a brand new thing to a few people, but seriously do so few of them actually understand how to use Google?

There is a not-so-little company called S-5!® (www.S-5.com) whose founder, Rob Haddock has it figured out. Now Rob didn’t fall off the turnip truck last week – he has more than a clue as to what he is doing.

“S-5!® founder Rob Haddock has thirty-five years in the industry.  Starting out as a metal building erector, today Rob is a well-known metal roof consultant, author, speaker and inventor.  Throughout it all, Rob has been unwavering in his belief that metal roofing is superior to other types of roofing, and believes  just as strongly today that his S-5!® clamp innovation is making metal the most user-friendly roof type on the market today. “There is simply no other roof to which things can be attached with such ease, economy and security,” he said.

Regarding the subject of metal roofing, Rob has authored numerous articles and has given countless educational talks for various trade groups.  Back in the 1980s and early ‘90s he was a faculty member of the Roofing Industry Educational Institute – and is now an adjunct faculty member at the University of Wisconsin School of Engineering. His presentations at METALCON rank as the most widely attended and highly rated year after year.

Today, Rob serves as Director of the Metal Roof Advisory Group, Ltd., a consulting firm performing a variety of services for a worldwide clientele.  For fifteen years Rob operated one of the nation’s largest metal roofing companies with some 10 million square feet of successful installations nationwide.  He has authored a number of training and educational curricula for various trade groups, and, having studied metal roofing history and applications both domestically and abroad, he offers unique insight into this ancient but fascinating field. “

Well S-5!® has developed a product called the VersaBracket™ which can be used to mount virtually anything to an exposed fastened roof system and is compatible with almost any trapezoidal, exposed fastened profile. No messy sealants to apply and no chance for leaks. It comes with factory applied butyl sealant already in the base for a water tight attachment.

The VersaBracket™ is so strong, it will even support heavy duty applications like snow retention (S-5!® happens to also manufacture ColorGard® snow retention systems).

Looking to add solar to a through screwed steel roof? If the potential provider doesn’t know about and use the VersaBracket™, maybe they aren’t the right folks to do the work.