Is Wood a Renewable Resource?

Did You Know Wood is Not a Renewable Resource?

Anyone can basically put forth just about any statement they want and craft a defense to it which someone will believe!

Of course this one was put forth in www.steelframing.org in one of their four times a year online issues of Framework.

Reporting upon a recently held meeting, the editors of Framework wrote, “…attendees discussed the various definitions for the term “sustainability,” with the primary focus that for a product to be classified as renewable, it must have no human intervention. If that’s true, then all of those tree farms used to produce the wood for construction would lose their renewable classification. In addition, the committee bounced around a new term – “neutral-newable” – to cover those materials that are classified as non-renewable but have characteristics like infinite recyclability. That’s steel! Proponents of the new term argued that it is unfair to penalize materials that continue to be replenished through the process of recycling without losing their chemical properties or strength.”

Now I realize this was put forth by the proponents of steel and the steel industry, who would appear to be trying to influence this interpretation by ASTM (American Society for Testing and Materials www.astm.org). If ASTM were to drink this Kool-Aid® it would give steel a more competitive edge against wood products.

In my humble opinion, coining a new term such as “neutral-newable” seems to be a smoke screen which just confuses the issues in the eyes of the general populace. 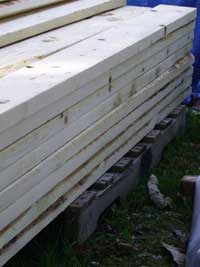 Trying to term wood as being non-renewable because it requires human intervention is bunk. I happen to live in the forest. In an area which has been logged at least three times in the past 125 years. My forest, along with acre upon acre of similar forests in North America grew back without the help of any humans doing replanting!

The idea of recycling steel not taking “human intervention” is one which I had to pick myself up off the floor after laughing about. Recycling steel takes lots of humans to recover, separate, process, transport and re-manufacture new raw materials out of the waste.

Steel has lots of great properties and our world would not be what it is today without steel – however I feel it is best to promote it for what it is, as opposed to trying to sling mud and pull down alternative products, such as wood, which have their own place.

Our planet is far more likely to run out of the resources necessary for the production (and reproduction) of steel, than it is of the truly renewable resource – timber!