Mike answers questions about a adding radiant barrier, wind and hail, and parts for sliding doors:

DEAR POLE BARN GURU: I have an existing pole barn and want to add a radiant barrier to the inside walls before I insulate and cover the walls. Is this wise and can I use a foil that comes in a roll. Once attached there would be a 1 and 1/2 inch air space between the foil and the metal.

Thank you for any advice you would have with this. CANDICE

DEAR CANDICE: This would not be a good idea as you are creating a space between two vapor barriers in which condensation could occur and moisture problems develop. Your best bet is to remove the steel siding, one wall at a time, install a well sealed building wrap (like Tyvek), then reinstall the steel.

DEAR POLE BARN GURU: We get a ton of wind and hail throughout summer months. How will pole barn hold up to these conditions? REBECCA in PEYTON 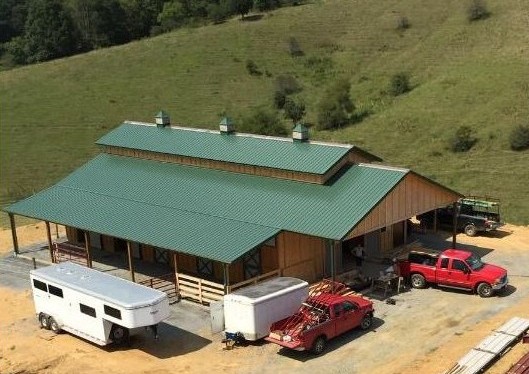 DEAR REBECCA: Here are quick links to your answers:

DEAR POLE BARN GURU: Good morning. We have a Miracle Span Quonset, would you have 10 x 14 sliding doors that would fit it? KRISTEN in BRAINERD 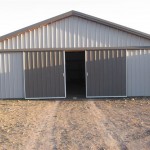 DEAR KRISTEN: Thank you very much for your interest. We do have sliding doors which would fit, however due to shipping challenges we only provide them with the investment in a complete post frame building kit package. We would suggest you visit the ProDesk at your local The Home Depot®.

How Effective is a Reflective Radiant Barrier?

Hansen Pole Buildings has probably sold millions of square feet of reflective radiant barrier. We do not sell it on the premise of being an end all for insulating purposes, but rather as an effective condensation control barrier. 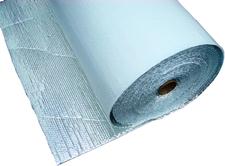 Promoted as a method for reducing cooling costs by mitigating solar heat gain through walls and attics, these shiny (typically aluminum) surfaces have as many detractors as proponents. The dispute is not about the science of radiant-heat transmission; it’s whether applying this science to your roof will make a difference on your utility bill.

Heat energy moves through buildings (and everything else) in three ways: conduction (when objects touch), convection (through air movement), and radiation (through an airspace or vacuum via electromagnetic waves). Insulation, thermal breaks, and air-sealing prevent conduction and convection; radiant barriers prevent heat transfer through radiation only.

Emissivity (or emittance) measures how much radiant energy a material emits. It’s rated on a scale from 0 to 1; the lower the value, the less energy emitted. Radiant barriers by definition have an emissivity of 0.1 or less, emitting 10% or less of the radiant energy striking them.

Are they radiating or reflecting?

Both, actually. Surfaces which are highly reflective to long-wave (heat) energy are also low-emitting. Aluminum, for example, reflects 97% of the long-wave radiation which hits it, emitting 3% into the airspace on the other side. Remember, though, we’re talking about invisible, long-wave radiation—not visible light. White paint, for example, does a great job of reflecting light but a poor job of blocking long-wave heat transfer. The key point is this: A material can look reflective and not be a good radiant barrier, and a good radiant barrier will work whether or not the shiny side is facing the heat source—as long as it is facing an airspace.

Current research supports radiant barriers in attics as a viable strategy for reducing cooling loads in hot climates. This reduction, however, is limited to solar gain from the attic—about 22% of a home’s cooling load. So even though research has found radiant barriers can deflect 40% of incoming attic heat, the net savings represents only 8% to 10% of a building’s total cooling costs.

The benefit is even sketchier in northern homes, where summer heat gain is less of a concern and the barriers may limit beneficial winter solar gain. Although radiant barriers may help to retain winter heat, most winter heat loss through attics is due to convection (rising air), not radiation—making proper insulation and air-sealing far more effective.

Because radiation occurs in an airspace, radiant barriers won’t work unless they face an airspace. Pressed between two surfaces, a radiant barrier becomes a heat conductor. In addition, because heat moves toward cold, there also must be a difference in temperature between materials. Radiant barriers, then, are of negligible benefit in well-insulated buildings.

Vented attics can be good places for radiant barriers because they contain large airspaces and take the brunt of solar-heat gain. Because walls are subject to less solar gain and because heat transfer through them relies more on conduction and convection than radiation, radiant barriers in walls provide less benefit. Although barriers placed on attic floors can work, surface dust will eventually hinder performance. 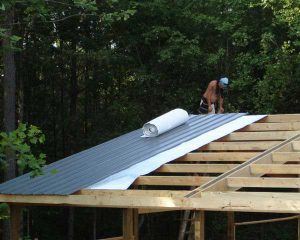 In a new vented attic, radiant-barrier sheathing can be used, or a foil barrier can be draped over the rafters or trusses before sheathing is installed. In the second example, the airspace created in the rafter bays enhances the foil’s effect by increasing ventilation.

Radiant-barrier foil can be attached to the rafter sides (below) or to the faces (top). The latter method curtails heat transfer through the rafters and is preferred. In both cases, gaps at the top and bottom promote ventilation. Double-sided foil provides a small increase in effectiveness.

When all is said and done, a properly installed reflective radiant barrier makes for a great vapor barrier and any heating and cooling savings achieved is just an added bonus!