When I was first in the post frame (pole barn) building industry almost 40 years ago windows were hardly ever a chosen option, and when they were, they were always single-pane windows.

With more and more post frame buildings being climate controlled, it truly only makes sense to use double-pane windows.

I was surprised when I read this on the website of another company which provides pole barn kits: “Even windows can be insulated. In an insulated pole barn, you might consider installing double pane windows.  They are more expensive than single pane, but increase energy efficiency and help keep the area climate controlled.”

It has been at least three decades since I would even have considered providing less than a double-pane window to a client.

Single-pane windows are made with a single layer of glass. They come in all of the same styles and materials double-pane windows do, but they are not as efficient at keeping out noise or seasonal temperatures. Their initial cost is less, but over time, energy bills will be higher.

Single-pane glass treatments have no insulation. When you have only one pane of glass, outside temperatures and noise will affect the inside of your post frame building more easily. However, the costs of heating or cooling down your pole building are directly related to the type of window you choose. 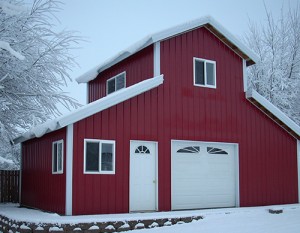 Double-pane windows come with two panes of glass. These panes are separated from each other by a spaced filled with air. This air traps winter’s colder temperatures or summer’s heat in between the two windows and forms a barrier which blocks the heat and cold from affecting your pole building. The energy savings over single pane windows can be as much as 24 percent in cold climates during the winter and 18 percent during the summer in hot climates. This results in lower energy costs and less noise, which can be an important consideration in high traffic areas.

These window treatments do initially cost more than single-pane windows do, since they use double the glass material, but the insulation and strength they offer can make them a much better buy. In fact, with double-pane windows you won’t have to use your air conditioner as often and your heater can be set at a lower temperature because the air temperature inside your post frame building will be more consistent.