Is It Really An Overhang?

Recently Hansen Pole Buildings Designer Doug forwarded to me a quote one of our clients had received from a pole building company located about a four-hour drive from our offices in Browns Valley, MN. To both Doug and myself, the quote appeared to be highly lacking in important details – such as what version of the Building Code (if any) is it to be designed to? And, what is the design wind speed and wind exposure? Just some minor trifling things which could make a world of difference in a building standing, or blowing away. 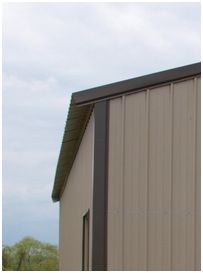 One thing I did happen to notice was the sidewall overhangs – which they had listed as being six inches of steel only.

Will the steel even carry the load?

This building happens to be in an area where the ground snow load is 60 psf (pounds per square foot) and they had proposed a roof truss with a 42 psf top chord live load. In snow country, eaves are to be designed to support two times the roof load, as snow will melt above the enclosed portion of the building and freeze in the overhanging area.

This particular pole builder uses Metal Sales 29 gauge Classic Rib for roofing (https://www.metalsales.us.com/system/files/resources/condensed-technical-reference-sheets/classic-rib-ctr-2015.pdf). It will support 81 psf (pounds per square foot) on a two foot span. This is based upon being supported at both edges, in which the formula is WL^2/8, where an overhang is a cantilever or WL^2/2. So we now have 4 times the load, over the square root of ¼ of the span.

But, how about the practicality?

Most jurisdictions now require buildings to be guttered. The only problem with the steel overhanging by six inches is any rain runoff will now fly entirely over the top of any gutters! The ideal length of steel overhang for gutters happens to be 1-1/2 to 1-3/4” past any high rib on a steel covered wall, or fascia with properly done overhangs!

Need to get up onto the roof for some reason? A ladder cannot be placed up against the edge of the steel and it means having to work up and over (or down and over) when getting on or off the roof. For most folks, this is less than convenient.

Believe it or not, there was a significantly sized post frame building company which used to (and still may) do one foot overhangs – by just running the steel past the sidewalls unsupported! Without some explanation from a salesperson, there is a good chance the unsuspecting customer doesn’t realize what it is they are, or worse aren’t…getting!