Ritzville, Washington lies along the Interstate Highway between Spokane and Seattle. In the heart of wheat country, it is also home of some huge, cone shaped piles of stored wheat. For many years, I had my lovely bride convinced the wheat piles were there because Ritzville was the home of Nabisco Ritz crackers.

Eventually I had to admit this was indeed a fabrication. 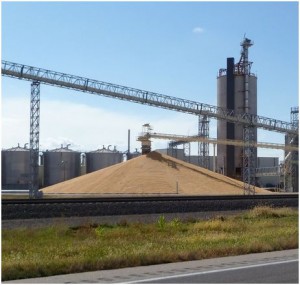 Grain frequently is stored short term in outdoor piles. However, precipitation is a severe problem for uncovered grain because grain is very porous. A one inch rain will increase the moisture content of a one foot layer of corn by nine percentage points. This typically leads to the loss of at least a couple of feet of grain on the pile surface, which is a huge loss.

For example, a cone-shaped pile 25 feet high is approximately 59,000 bushels of grain. Losing just one foot of grain on the surface is a loss of about 13 percent of the grain, which is $39,000 if the grain value is $4 per bushel.

Rather than losing the $39,000 – the money could be better invested into a new pole building for grain storage.

Grain must be dry and cool (near the average outdoor temperature) when placed in alternative storage facilities because providing adequate, uniform airflow to dry grain or cool grain coming from a dryer is not feasible, according to Hellevang.

Grain pushing against the walls can damage buildings not built for grain storage. To estimate the amount of force which grain exerts on a wall, multiply the grain depth by the grain’s equivalent fluid density (EFD). For example, the force pushing against the base of a five-foot wall of a structure containing corn would be about 115 pounds per linear foot of the wall (5 feet x 23 pounds per cubic foot = 115 pounds per linear foot).

The wall must be anchored securely, and its structural members must be strong enough to transfer the force to the building poles or support structure without breaking or excessive bending. The total force per linear foot on the wall is the force at the base multiplied by the grain depth divided by two.

For this example, the total force is 288 pounds per linear foot (115 x 5 / 2). In a pole building with poles spaced 12 feet apart, the force against each pole is 3,456 pounds (288 x 12). Typically, you’ll need additional poles and a grain wall to support the grain force in a pole building.

Pole buildings to be used for grain storage should only be designed by a Registered Design Professional (RDP – engineer or architect). To do otherwise would be putting not only the building and the stored crop at risk, but could also prove a hazard to human life.

Before placing grain in a building previously used for grain storage, look for anything out of alignment, such as the wall bowing. Also check the roofline. Bowing or bending indicates the load on the building exceeds the load for which it was designed and built. Examine connections for separation or movement. A connector failure can lead to a building failure. In the event anything appears structurally out of the ordinary, immediately contact an RDP for a thorough examination of the potential problem, as well as a repair, if one is warranted.