Hansen Buildings is very proud that we are one of very few pole building kit suppliers offering our customers powder coated screws. There is nothing more unsightly to me than a new pole building that has just completed construction and a large portion of the paint is missing from the screw heads. I know what most of you are thinking, how different can our screws be from our competitors fasteners? Extremely different actually, some competitors don’t even use screws to fasten their steel, they use nails! As someone who works daily out of another manufacturers building that has the steel siding and roofing nailed, never consider this option.

Pole building screws vary in every way possible. You will see many different paint systems, different lengths, diameters, head sizes and designs, screw designs, washers and coatings that it will make your head spin. Keep in mind that although screws are a small part of an entire structure they are one of the most important pieces in the buildings’ overall design.

This summer I happened to visit one of our clients’ buildings who also happens to be a friend. He needed a couple of wainscot panels replaced that were scratched. I brought with me the three panels I was going to replace for him and a handful of screws. While removing the existing panels I noticed some flaking off the heads of the screws. This confused me as our powder coated screws should show very little or no signs of paint coming off during installation. In fact our supplier offers a warranty against this when you use their approved lobular drive bits:

I finished replacing the panels and took the problem screws back with me. 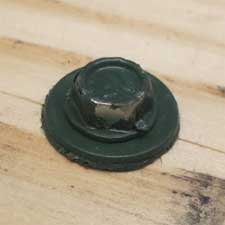 As soon as I got back to our warehouse I grabbed a different color of screw and a couple different stitch screws for fastening trims to see how they fared. Unfortunately it was the same results regardless of type of screw or color. My first thought was, “where are all the customer complaints on this”? To me this was a major malfunction. I called our supplier and explained what I was seeing and sent photos to go along with our experience. They confirmed after some back and forth that there was indeed something very wrong with the paint on these particular screws.

I then thought back to a visit to the NFBA (National Frame Builders Association) Expo that we attended in St. Louis, MO in the spring of 2012. I remember visiting one booth in particular that was trying to sell us on their screws. I stood there and listened attentively with the Pole Barn Guru standing next to me who I could see was ready to ask some very pointed questions. The first question to leave his lips was, “Do you powder coat your screws”? The answer was a clear NO and a look of… “why does that even matter?”. After further discussion this supplier tried to explain to us that standard paint is just as good. When asked if all the paint will stay on after installation we were told, “Industry standard requires that a maximum of 25% of the paint can come off during installation to meet grade”. I could tell Mike The Pole Barn Guru was saying to himself, “Are you kidding me? 25% of the paint coming off new screws on our building would look hideous”. This confirmed to me why powder coated screws, when working as promised, are a much better product and worth the added cost.

Getting back to my screw situation required months of testing with the supplier before the issue was found. The cause ended up being the zinc plating on the steel below the paint that was not allowing the paint to properly adhere to the screw. We have since gone to a new plating to resolve all issues.

I learned a few things on this screw journey. Our screw supplier tests each run of screws in a laboratory controlled setting. The drills that test each screw run only at one speed, one pressure, at a perfectly straight angle by running a screw through 29g steel into a framing member. Yes I know, this is a far cry from the actual end user who uses these with a variety of drills and within many different environments.

Stick to these rules and you are well on your way to constructing the best building possible. Screws are one of the most important parts to the complete design of your building. Hansen Buildings takes great care to provide the best possible building along with a keen eye for any product defects. We could be just another building kit supplier, but we chose long ago not to be. Every component in our building has been chosen with quality and experience in mind to provide the best value building kit on the market.

This entry was posted in Powder Coated Screws and tagged stitch screws, painted screws, diaphragm screws on January 28, 2014 by admin.

Ask the Pole Barn Guru: What Type of Screws Should I Use?

What Type of Screws Should I Use?

DEAR POLE BARN GURU: Screws.  I have used the common hex-head with steel/neoprene washer many times in the past.  I have had some of them rust, and over the 16 years one building has stood many of them now appear loose, washers not quite touching the metal anymore.  Seems apparent the wood is gradually rejecting the screw, or freeze/thaw cycles here in MN are loosening them.  NOW I will start a house project within a year and will use exposed fastener ProRib roofing product again.  Local Menards has something new, called Residential low-profile screw.  No seperate steel washer, torx 25 button head is somewhat concave on bottom, and neoprene or rubber washer is slipped on.  I like the idea that the washer will be trapped and compressed in the space, will not squish out and show to UV.  HOWEVER the screws are advertised as galvanized, but are yellowish plated color so are obviously Cad plated.  That mismatch of information leaves me nervous about using them.  I could maybe use Stainless at four times the price of galvanized and painted.  Unsure of best screw to choose now that I have looked behind the curtain and had some experience with them, I see limitations in all the types I am now familiar with.  Any suggestions?  Thanks! ROCKIN’ IN ROCHESTER

DEAR ROCKIN’ ROCHESTER: Screws are one of the most important components of any steel roofing application, and yet the quality of the screws is so often overlooked.

Rusting – the quality of galvanization is a place where a manufacturer can save money and no one is the wiser until years down the road, when the rust starts to appear. On steel panels, it is fairly easy to get an idea of the amount of galvanization, as the “spangle” or pattern of a highly galvanized panel is much tighter with more zinc.

Chances are the screws you see as rusting had a limited amount of galvanization on them. Often these screws have been imported from third world countries, which use a bare minimum of electroplated galvanization. Assuming they originally probably had painted heads, often the paint is damaged when the screws are installed, which reduces or removes the added protection afforded by the paint.

This is why I always recommend using powder coated screws, driven with a lobular driver bit. Powder coating also paints under the screw head, where rusting typically starts.

Why you have screws which appear loose…wood does not reject screws. The inherent nature of screw threads actually will cause properly driven screws to get tighter over time. And freeze/thaw cycle will not change this tendency. As a visual example, drive a screw partially into wood. Look at the wood fibers around the area where the screw penetrates the wood. The fibers are actually pulled up (as opposed to nailing which pushes them down). Wood has an elastic memory, so as it returns to its natural state, the fibers pull the screw in.

The culprit – the neoprene rubber washer. As the washer breaks down, due to UV radiation, it shrinks. As it shrinks, gaps appear between the washer and the steel roofing. When the gap becomes large enough, it allows minute amounts of water to enter around the shank of the screw. This water will eventually cause deterioration of the underlying roof purlins, and/or the shank of the screw itself.

I experienced this problem on the roof of my own home. In doing some remodel work, I had to remove some of the steel roof panels. After only 10 years of service, I was surprised to find the shanks of some of the screws had been rusted down to about the diameter of a toothpick!

The solution is to use screws which utilize vulcanized grey EPDM instead of neoprene rubber for washers. In combination with a “flow cone” steel washer (the cone nearly completely covers the EPDM), this provides for a 100% seal with no leaks.

The yellowish color is probably yellow zinc. It resembles Bright Brass plating, but appears more iridescent. It offers a modest amount of corrosion resistance (under approximately 100 hours of salt spray testing, about 10% will red rust).

Rather than going to the expense of stainless steel screws, look for JS500 plating. JS500 is a patented process developed by MacDermid, Inc. Developed for automotive applications, it has a very high corrosion resistance. Basically JS500 is a zinc electroplate followed by a conversion coating, which is then followed by an extra topcoat layer, which gives the plating additional performance.

In summary – JS500 plated, powder coated screws should afford all of the worry free protection you will ever need. The supplier who provides them for Hansen Buildings, guarantees the screws to last the lifetime of the steel panels, with no red rust. Pretty impressive in my book.